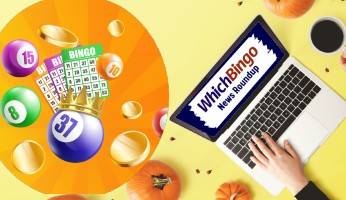 This week, we officially marked the first day of autumn, but never mind the weather; what’s been happening in bingo land? Well, there’s plenty to tell you, including further information about the upcoming takeovers of two leading online bingo providers (Entain and Gamesys). Plus, Tombola is celebrating the 13th birthday of one of its most popular bingo rooms. Over at LeoVegas, a popular payment method has been removed while many online casino and bingo sites have welcomed Pragmatic Play’s latest slot game. There’s also a new ad campaign from Ladbrokes, plus an impending review of the UK Gambling Commission.

The big news this week is the relaunch of the all new Heart Bingo site. It’s got a new logo, new bingo games powered by Pragmatic Play and a new face to welcome you on board – it’s Olly Murs everyone! What a great choice to really make a point of how fun and friendly this site is. Not only is Olly all over the home page to welcome you on board, but they have even developed an exclusive slot game in his name that is a lot of fun to play. Check out Olly Murs’ Big Box Bonus game with its bonus box wins, its big bonus round and the chance of free spins.

That’s not the only exclusive at Heart Bingo. The site has some of its own exclusive bingo rooms and an exclusive daily free game for depositing players to take advantage of. Be sure to check out our full review of this great new bingo site and don’t forget to leave a review of your own once you’ve given it a try.

It seems crazy to think that it’s a whole 13 years since Tombola launched its new bingo game, BingoLite.

The site’s BingoLite room offers games that resemble those offered by Bingo90, except the ticket prices are lighter. You can pre-buy cards or purchase them just before the games begin for between 2p and 40p.

There is a choice of BignoLite chat rooms to play in such as Fizz, Bubble, Breeze, Sugar, Cloud and Feather. Plus, each game offers one-line and full house prizes, as well as a progressive jackpot that can be won by calling the full house in 43 numbers or less.

Ladbrokes has just launched its first brand-led campaign for slots and casino games.

“Balloon” is the title of the third campaign which has been developed by Neverland, a London-based creative agency and it was shot by an Emmy-nominated director.

An indie punk soundtrack accompanies the ad which, somewhat oddly, makes no reference to games, bonuses or jackpots, but instead focuses on the message “We Play Together”.

The advert shows an office hosting a leaving party, and when one worker spots a balloon heading in his direction, he proceeds to head it over to a colleague, and soon after, the whole workforce has emptied out into the streets with thousands of people flocking to take part in “the most epic game of balloon keepy-uppy”.

The popular online casino and bingo brand, LeoVegas has just announced that it will be removing Neteller as a payment method with effect from 22nd September 2021.

Although the operator hasn’t explained why it’s taken such steps, it has apologised for any inconvenience and reminded players that they are still able to use alternative methods such as Paysafecard, Visa Debit and Paypal. LeoVegas also operates an open-banking service that allows for instant withdrawals!

Anyone who has recently made a deposit at the site using Neteller has until Monday 4th October 2021 to withdraw any remaining funds back to their Neteller account.

Following the appointment of Nadine Dorries as the new secretary of state for Digital, Culture, Media and Sport, the Betting and Gaming Council (BGC) has reinforced the importance of the government’s current gambling review being evidence-led.

The Council’s chief executive says that the BGC has been working “extremely closely” with the DCMS to help it achieve the “right balance” in its review. He is keen to see higher standards on safer gambling to protect vulnerable people while also allow responsible gamblers to have the freedom to enjoy “an occasional flutter”.

Ladbrokes and Gala Bingo owner, Entain is said to be considering a $22 billion (£16.5 bn) offer from the US fantasy sports betting firm, DraftKings.

Earlier this year, Entain rejected a bid of $11 billion (just over £8bn) from MGM Resorts, and while the DraftKings’ offer is more substantial, Entain says there’s currently no certainty that the deal will go ahead.

Bally Corporation is a step closer to acquiring the Gamesys Group (which owns brands like Jackpotjoy) after receiving regulatory approval from the UKGC and expecting to receive the go-ahead from the necessary US authorities in late September.

Bally hopes that the takeover of Gamesys will allow it to “capitalise on the rapidly expanding US online sports betting and igaming market”.

APPG for Betting & Gaming considers the effectiveness of the UKGC

As part of the UK government’s review of the 2005 Gambling Act, it has begun an inquiry into the effectiveness and competence of the UK Gambling Commission.

It’s concerned that the many criticisms and allegations that have been made against the UKGC by members of the industry warrant further investigation. As the government is aware that some operators and advisers may be “too scared” to air their views publicly, they are invited to do so in confidence via the APBGG website.

The game takes you to a picturesque harbour on the outskirts of a city, and when you start to spin the reels, there’s the potential to win prizes as big as 4,000 times your stake.

Bigger Bass Bonanza comes with a thrilling free spins feature where you can hook bigger prizes by landing symbols, as well as collect wild symbols to win extra spins.