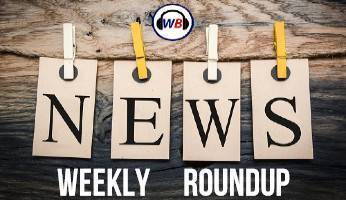 In this week’s news round-up, people across Britain are inventing new types of bingo to raise funds for local charities and help people suffering from dementia. Plus, the Metro newspaper has put together a guide on how to host a Zoom Christmas Bingo party. We’ve also got this week’s new slot game releases while Pragmatic Play is getting into the festive spirit with Snowball Bingo! And it’s the final call for those of you who are hoping to win big with Mecca Bingo’s £10,000 Christmas Nights.

Get ready to duck because Pragmatic Play is throwing a brand-new game at several online bingo operators this week!

As well as using Christmassy graphics such as snowmen, Snowball Bingo comes with bigger guaranteed prizes than Bingo Blast.

Pragmatic’s Vice President of Bingo, Claire McDaid, says she hopes that the game “will warm players’ hearts” and allow them to “stay snug and cosy indoors with their very own frosty snowman”.

Online bingo sites that use Pragmatic Play software include PlayOJO, Butlers Bingo, and Mirror Bingo. So, why not head over and check out Snowball Blast at one of them today?

A Lancashire-based children’s charity called Rainbow Hub has just received an amazing donation of over £7,800.

Rainbow Hub helps to support kids with neurological and physical disabilities, and one of the charity’s recent beneficiaries is 2-year-old Ronnie Berends-Sheriff who has epilepsy and cerebral palsy.

The generous donation came courtesy of an online event called Ronnie’s Rainbow Bingo, which was organised by a member of Barclays Bank. Thanks to Barclays’ staff taking part, plus the bank matching the funds raised through the event, the charity got to benefit from £7,840.

Alzheimer’s and dementia are awful diseases that can affect not just sufferers, but also their nearest and dearest. So, it’s great to see that Christmastime has given rise to not one, but two amazing charity-related events.

Staff at the Herne Place care home in Kent took advantage of National Elf Day to put on an entertainment extravaganza for their residents. The games included a special Xmas quiz, Elf Bingo, and a best-dressed elf competition. One resident couldn’t thank the staff enough, saying “what a wonderful way to raise money for charity!”

Up in Scotland, members of the Kirkcaldy and Dundee branches of Alzheimer Scotland have been taking part in online bingo sessions that are designed to support Alzheimer sufferers who often feel socially isolated.

The organisers are calling it Doggy Bingo and some of its hosts include canine companions from the charity, Dogs for Good.

Dogs such as Billy are supposed to draw random bingo balls from a container and take them to the bingo caller, but as one organiser points out, sometimes “doggie fails” result in the caller being handed a pair of slippers or a toy instead of a bingo ball.

Despite the odd hiccup, one of Alzheimer Scotland’s dementia advisors says that “participants can’t wait for the next session” and “love the fact that it’s the dog that picks the bingo balls”. The sessions have proved so popular that the charity plans to train even more dog volunteers in January.

Mecca Bingo has been running its £10,000 Christmas Nights promotion since Monday, 21st December, but the good news is, it keeps on going until Sunday, 3rd January, so you’ve got a full week left to join in the fun.

Every night from 7 PM in The Main Event room, you have the chance to win at least £250 in every game, and there’s £1,000 cash to play for at 9 PM. Many of the games include Roll On prizes, so you can even win after the first full house has been called.

With many people under lockdown restrictions, our social lives have had to take a back seat.

However, the clever folk at the Metro newspaper have come up with 33 ideas to help you host a “Zoom Christmas party that isn’t rubbish”.

The first idea on the list is a Xmas-themed bingo game while other inventive suggestions include a team picture scavenger hunt, Christmas karaoke, Secret Santa, cocktail-making classes, awards ceremonies, Charades, and cookie decorating, all of which can be held on video calling and social networking apps like Skype, Houseparty, and Zoom.

Whether you believe that Christmas is done and dusted, or (like Slade) you wish it could be Christmas every day, our mini-round-up of this week’s new slot game releases contains something for everyone.