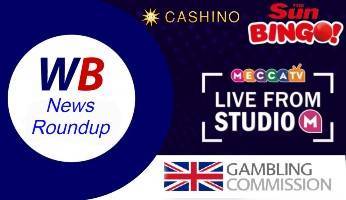 In this week’s news round-up, there’s been a flurry of activity at the UK Gambling Commission with new rules for slot game designers, and updates on its Live Experience Panel and National Strategy for Reducing Gambling Harms.  Entain announces that it’s working with players to help contribute towards regulatory debates, Mecca Bingo unveils its new “Live from Studio M” concept, ICE 2021 gets pushed back to next year, unpaid carers in Hastings are rewarded with perks including online bingo, and Aberdeen could soon see a new bingo hall.

The Gambling Commission began a review into Aspers’ Stratford casino in late 2018 following the suicide of one of its customers. It has now had time to fully assess whether the casino was complying with all the necessary regulatory requirements and has identified several weaknesses in how the venue managed its customer interaction, social responsibility, and anti-money laundering policies and processes that allowed the customer to make “several unchecked cash purchases”.

The casino has now implemented several improvements after carrying out an internal report. However, the Gambling Commission warns that it will continue to watch the venue’s “future conduct closely” to ensure that its staff are managing to detect unusual patterns of play and signs of gambling harm.

The Commission has also published a progress report on the delivery of its National Strategy to Reduce Gambling Harms, which includes a new and improved actions map that shows the current status of its key targets such as publishing research into bank transaction analysis and producing guidance for the finance sector on working with vulnerable customers.

This week also saw the first meeting of the UKGC’s Experts by Experience Group who have been tasked with providing evidence, advice, and recommendations through their personal experiences of gambling harm.

Relax Gaming, the maker of hit slots, bingo, and table games such as Temple Tumble Megaways, Ramses’ Revenge, Money Train, and Caveman Bob, has just appointed a new senior business development manager who has been tasked with expanding the company’s UK presence.

Alba Monroy has previously worked for Microgaming, IGT, and Paysafe Group, and Relax Gaming believe she is “the right person” to assist with its plans for new markets and expansion.

Entain, the company behind famous names like Foxy Bingo and Gala Bingo, has always encouraged its players to provide feedback. Now, however, it’s taken things to a new level by establishing a players’ panel which will allow consumers to have a say on any proposed changes to the current UK gambling regulations.

Entain has sought volunteers from across its brands, asking them to highlight any gambling-related issues and potential solutions to the problems raised. Participants will receive no incentives as the company wants them to provide input of their own free will.

ICE 2021 postponed until next year

Two of the biggest annual events in the gaming industry have had to be postponed for a second year running.

Both ICE London and the iGB Affiliate conferences which were scheduled to take place in June/July 2021 will now be held in February 2022.

The event organisers, Clarion Gaming, has based the decision on customer feedback and says that it’s keen to ensure that the safety and wellbeing of its attendees are top priorities.

The Betting and Gaming Council has spoken out in support of the Gambling Commission’s new rules on online slot gameplay and design.

The Council’s chief executive says that BGC members have already introduced several safety features such as minimum spin speed cycles and the cessation of turbo play and multi-slot play modes, and it embraces the Commission’s additional measures such as removing sounds and images that “celebrate losses as wins”.

The slot arcade chain Cashino looks set to open new bingo premises after gaining a bingo hall license from the Aberdeen Licensing Board.

The company is eager to open a new adult gaming centre on the site of the old Gaumont Cinema in Union Street.

Although it’s still waiting for planning permission to be granted, Cashino Gaming hopes that the local council will see the need to bring “vitality and vibrancy” back to the declining area of Aberdeen city centre.

Aside from the NHS and key workers, unpaid carers have been the unsung heroes of the COVID-19 pandemic, and those who live in the Hastings area are finally receiving recognition for their efforts.

Thanks to a collaboration between local GP practices and the charity Care for the Carers, a new project is now helping to identify and register carers so that they can benefit from free advice and support, counselling services, and a range of free activities that will allow them to take a break from their responsibilities including online bingo, wellbeing activities, and online cookery sessions.

Sun Gaming brands, which include Sun Bingo, Sun Vegas, and Fabulous Bingo, have just launched a new range of games after the company struck a deal with 1×2 Gaming and Iron Dog Studios.

Sun Gaming’s casino manager, Claire Turnbull, describes the news as “a great start to 2021” and adds that UK players will now gain access to an exciting selection of new slots including Blood Queen, Rainbow Wilds, and 1 Million Megaways BC.

Between 8 PM and 10 PM from Monday to Saturday, the brand’s Roller Coaster, Penny Lane, and Main Event rooms will play host to a string of live stream giveaways and quizzes which will include celebrity appearances and plenty of cash prizes. Friday and Saturday nights will also see special Chatterbox Bingo and Bonkers Bingo specials while players who listen out for the daily secret code could receive a call live on air for the chance to win even more great prizes.