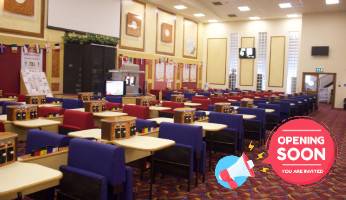 The BBC recently interviewed players at a bingo hall in Northern Ireland to find out how they felt about bingo halls reopening. It seems as though players are as happy as the bingo club’s employees to be back playing their favourite games.

From dealing with snidey comments and catching up on gossip to renewed friendships and rowdy groups, bingo is back with a bang in Northern Ireland.

Members of Jackpot Bingo in West Belfast spoke to a journalist from the BBC, and it seems that many are relieved that bingo halls have been able to reopen after months of lockdown.

The early bird catches the worm

One of the club’s regulars, Sharon Lindsay, says she couldn’t wait for the doors to open at 6 PM even though the games don’t begin for another two hours.

Despite operating with reduced capacity, the venue was filled with the sound of chatter until the games got underway. However, it seems as though some players can get quite competitive about the prizes, with one lady telling the BBC that “the others don’t like it when you win”.

Isolation is now a thing of the past

Most players though are happy to be back, and many of the older members who live alone and have had to go five months without any face-to-face contact are relishing long overdue catchups.

One group, who the staff affectionately refer to as the Golden Girls, sit in what’s known as the “rowdy corner”. Many of them are friends with the club’s manager, Ciaran Gallagher who says that it’s great “to see them back again, as well as knowing that they’re well and safe”.

Online is a pale comparison

Some of the players tried playing online bingo while clubs were shut, but according to Mary Doak, “it just wasn’t the same” as she missed her friends.

Many of the club’s seats are not in use due to social distancing measures, and the staff work hard to keep the tables and communal areas clean. Almost all the club’s visitors have had at least one vaccine but some, like Rose Shaw, still contracted COVID-19, and for them, a big part of the mental health recovery process is being helped by the return of land-based bingo.