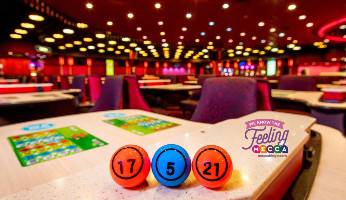 The Mirror recently sent one of its journalists to interview some of the regular visitors to a popular Leeds bingo club. The aim was to find out why people love bingo and how they feel about playing since venues were finally allowed to open in May 2021.

Whether you play bingo online or offline, we’re sure there are reasons why you choose to play the way you do. For example, many club customers enjoy face-to-face contact while people who prefer to play at online bingo sites often say that the chat rooms and chat hosts make the playing experience more fun.

Natasha Wynarczyk, a journalist for the Mirror recently visited Mecca Bingo in Leeds Mayfair to see how busy it was, the types of people playing and the reasons why they choose to play at this particular club.

Clubs are getting busier

After suffering a considerable loss of profits due to the pandemic, it seems as though bingo clubs are finally turning things around, particularly now they are no longer required to keep tables and seats 1 to 2 metres apart.

At Mecca Bingo Leeds Mayfair, even Monday nights seem to be attracting plenty of players, and according to the Mirror’s journalist, there was a good mix of first-timers, regulars and even a hen do.

Loyalty seems to be a big factor in helping bingo halls get back on their feet. One 89-year-old has been coming to Mecca Bingo Leeds Mayfair since it first opened in the 1990s.

Barbara Kelly is happy to visit on her own and says that she “couldn’t wait to be back after lockdown”. As a non-smoker and non-drinker, Barbara says “bingo is my only pleasure”. She’s even embraced modern technology and usually uses an iPad to take part in the games.

Another club regular is 83-year-old Winnifred Halliday who sometimes attends with friends and family but is equally happy playing alone as she knows that there’ll always be some friendly faces.

Winnifred says that she noticed that people returning to the bingo club seemed “nervous at first” but are now “feeling confident enough to come back”.

The general manager of the Leeds-based bingo hall says that new ideas are also helping attract both old and new customers. For instance, the venue is planning to host a Bonkers Bingo night next month where customers, albeit probably the younger end of the market, will be able to enjoy a range of cocktails, bingo games and enjoy a DJ set by the Swedish electro-pop band, Ultrabeat.

The journalist observed that there were many younger people playing when she visited, including a pair of friends in their 30s. One of the women works at a local school and says that her regular Monday sessions at the club provide her with a kid-free day out. She adds that “places like this are so important for the social aspect”, although she admits that it’s also “a bonus when you win!”

It’s good to see that even on traditionally ‘quiet’ days, bingo clubs can be seen to be a valuable asset to a community. This would indicate that live bingo and bingo halls still have a big part to play in British culture.