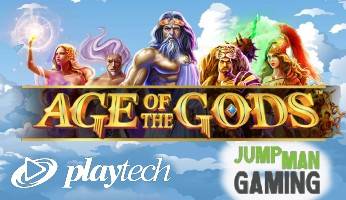 Playtech has extended its partnership with Jumpman Gaming to improve the number of games that the operator’s bingo players can enjoy. So far, we’ve been told that 9 new titles will be rolled out across online bingo brands like Barbados Bingo, including Fruity Burst.

Over the past 12 months, the operator Jumpman Gaming seems to be making a significant improvement to its online bingo network. It’s already replaced its rather basic in-house bingo suite with the impressive Pragmatic Play platform, and now it’s extending its range of bingo side games too.

The new games will be supplied by Playtech, the award-winning bingo and casino operator and the company behind the much-loved Virtue Fusion bingo platform.

Which titles will be coming to Jumpman sites?

We’ve been told that there will be 9 new games to begin with, including Tiki Paradise: Masks of Mayhem, Fruity Burst and slots from Playtech’s Age of the Gods series.

The arrival of the Age of the Gods games is particularly exciting, as although Jumpman Gaming sites already boast plenty of online slots, they lack any decent progressive jackpot slots.

Although we’re unlikely to see the full 20+ games in the Age of the Gods series for a while, we’re hopeful that some of the most popular ones like Ruler of the Sky, Furious 4, Goddess of Wisdom, Rulers of Olympus and King of Asgard will be rolled out as part of the new agreement

More about the Playtech/Jumpman deal

Jumpman Gaming’s Managing Director, Kris Kukula, says that the extension of the Playtech partnership will allow Jumpman to continue with its goal of “providing a wide range of high-quality games” to its customers.

Jumpman Gaming is also the first operator to benefit from new content from the Playtech Bingo Games Studio.

Where can I play the new games?

The new bingo side games will be made available across all Jumpman Gaming online bingo brands including Mirror Bingo, Dove Bingo and Free Spins Bingo.