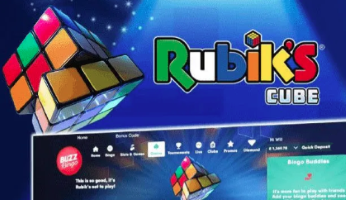 One of the biggest software developers in the world has chosen Buzz Bingo as the site to unveil its latest slot game.

Rubik’s Cube is, of course, based on the iconic, 3D combination puzzle that made its debut back in 1974.

Thankfully, Playtech’s version of Rubik’s Cube is nowhere near as mentally challenging or frustrating as its namesake. However, it does blow your mind with its myriad of special features and 3D graphics.

Sticky Wilds are included to help players increase their chances of landing wins, while the Free Spins Bonus offers a choice of six different modes with ranging amounts of volatility and win multipliers.

The game is currently on a limited and exclusive release with Buzz Bingo, and it uses 5 reels and 25 paylines. The paytable symbols are comprised of the different colours of the Cube (e.g. red, blue, green, yellow, and orange) and low-value playing card symbols.

Fun facts about the Rubik’s Cube