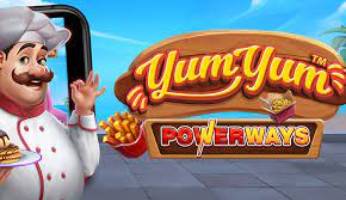 Pragmatic Play Cooks Up a Tasty Treat With Its Latest Slot

The popular bingo and casino developer and creator of Bingo Blast has just unveiled its latest game. Find out more about Yum Yum Powerways and the prizes that it offers courtesy of the WhichBingo team!

From an operator’s perspective, one of the advantages of choosing to use Pragmatic Play’s online bingo platform is that you can also offer your players many of Pragmatic’s top slots and casino games.

According to Pragmatic Play’s Chief Business Development Officer, Yossi Barzely, Yum Yum Powerways “brings engaging features to the table, as well as a great win potential”. Thanks to the inclusion of several exciting bonus features, it’s one of the company’s most “treat-filled” titles to date.

Powerways is one of the slot’s most interesting game mechanics, and we’ll hopefully see it making more appearances in future Pragmatic Play releases.

Powerways makes it possible to create winning combinations by landing 4 symbols in a row from right to left, from left to right, up to down and down to up. By increasing the number of ways to form wins by up to 16,384, it’s more likely that you will scoop a tasty prize.

Another advantage of Powerways is that it automatically removes all winning symbols from the playing area to give you further chances to create winning combinations. Each consecutive win increases the win multiplier too!

The game centres around a mobile food stall where hungry customers can order everything from Chinese and pizza to chips, roast chicken and doughnuts.

The burger meal acts as the wild symbol while the chef represents the scatter symbol. Land 3 Chefs and the Free Spins Bonus is awarded.

Where to play Yum Yum Powerways

We already know that Yum Yum Powerways has landed at PlayOJO, the popular online casino where you can also enjoy some of the best online bingo games around.