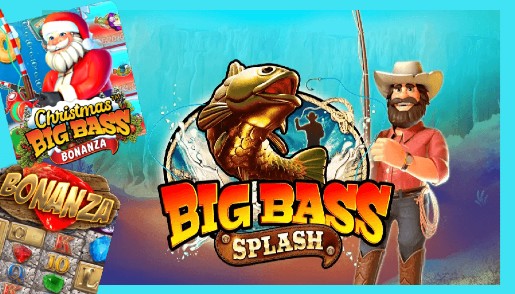 A staple of many Pragmatic Play bingo sites is an online slot called Big Bass Bonanza. It’s one of the software provider’s biggest success stories, and the company is now hoping to top it with a brand-new instalment called Big Bass Splash. Find out how to hook some big wins and trigger the bonus features here!

The new game reintroduces the familiar Big Bass symbols such as the bait, the fishing rods, and the tackle in a crisper, sharper form. There’s also a new symbol in the shape of a monster truck which is one of the game’s most valuable symbols.

The nudge feature is awarded when two scatters appear in the base game to give you a better chance of landing a third scatter which is required to enter the Free Spins Bonus.

When the Free Spins Bonus is triggered, you have the chance to catch fish that can award additional modifiers such as extra fish, fisherman, and extra spins. The bonus game features the much-loved fisherman symbol that can catch valuable fish symbols with increasing win multipliers.

A brief history of the Big Bass slot series

There’s no denying that every Big Bass slot looks similar to Blueprint Gaming’s Fishin’ Frenzy slots. So, it makes sense that the reason the first Big Bass slot was created was to compete with Pragmatic’s rival.

It was in 2020 that Big Bass Bonanza made its debut to the delight of players who were keen to see more fishing-themed slots, and it became an instant hit thanks to its free spins bonus that offers instant cash prizes and 10x multipliers.

The summer of 2021 saw Bigger Bass Bonanza splash onto the scene, offering bigger wins of up to 4,000 times the total bet.

Later the same year, Pragmatic Play released Big Bass Bonanza Megaways using the popular Megaways game mechanic that was created by Big Time Gaming for its Bonanza video slot. This time around, the paylines were replaced to give players as many as 46,656 ways to win.