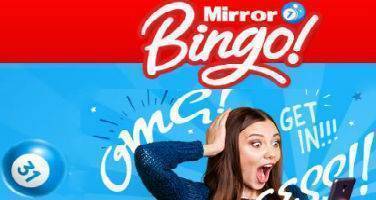 Mirror Bingo launched in 2008, and it’s the flagship online gaming site of The Daily Mirror newspaper.

Using an exciting blend of bingo, slots and casino games courtesy of Cashcade, the site quickly became one of the top destinations for online bingo players in the UK.

However, like many bingo sites, the operator of Mirror (Reach Plc) decided in later years that it was time to make some major changes to enhance its members’ playing experience while also helping to boost its profits.

After all, the site had already jumped ship once before when it swapped from Cashcade to Playtech’s popular Virtue Fusion network in 2014.

As part of the revamp, Reach chose to migrate to a different software platform, and after some deliberation, it plumped for Jumpman Gaming and its 15 Network.

Since switching to the 15 Network, Mirror Bingo has a brand-new set of offers and games to tempt its players with, including a variety of bingo, slots, and casino games, plenty of options for low-stakes players, and a healthy serving of jackpot games.

Jumpman’s software also allows for elements of gamification (which has proved particularly successful for online gaming brands such as Casumo, Rizk Casino, and PlayOJO in recent years).

For example, members can collect virtual trophies by completing simple tasks, which can also help them unlock new loyalty levels. There are hundreds of trophies to collect, and the tasks seem relatively achievable such as making a deposit using Paypal.

The selection of slots which the Jumpman platform offers gives players access to many more software providers than the previous software platform (Playtech), with big names like NetEnt, NextGen, and Bally appearing alongside smaller gaming studios like Tom Horn, Red Tiger, Just for the Win, Eyecon, and Lightning Box.

And, it’s not only Mirror Bingo that Reach has chosen to relaunch its flagship brand with. Reach has also taken two of its other sites out of retirement (N.B., Star Wins and Express Wins) and re-entered them into the market on the same software and network.

However, as the WhichBingo team has discovered, Jumpman Gaming bingo platforms come with both pros and cons.

We’ve already mentioned some of the plus points such as Pragmatic Play’s bingo games and the Bingo Millions jackpot games, but on the downside, there are a profusion of lookalike 15 Network brands, a smaller player base, limited customer service options, slow withdrawal processing, and the “like it or hate it” Mega Wheel bonus.

Despite this, Reach has chosen to trust its new partner, Jumpman Gaming, with three of its sites, and for a company which also happens to be the UK’s largest print and digital publisher, we have to assume that it did its homework.

Reach’s Head of Betting and Gaming, Mark O’Donnell, certainly believes so, referring to Jumpman as a “very successful”, “young”, “agile” business with an impressive “approach to player experience, enjoyment, and loyalty”.

Mr O’Donnell also emphasises that although Mirror Bingo, Express Wins, and Star Wins will now all reside on the same bingo network, they will each boast “a distinct style and audience” which will allow each of them to appeal to “players of different ages and interests”.