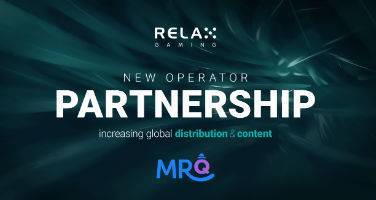 It seems to be onwards and upwards for the unique online bingo brand, MrQ, which is continuing to innovate through a newly agreed partnership with Relax Gaming.

The bingo and slots site, which runs on bespoke software, already offers games from other providers including Eyecon and Thunderkick and now, thanks to the new Relax Gaming deal, players will have even more options to choose from.

When MrQ.com was launched back in 2018 by Lindar Media (which also owned white label bingo sites including Circus Bingo and Pixie Bingo), it immediately stood out for many positive reasons.

Firstly, it uses an unusual name that gives it an air of mystery. Secondly, it runs on a proprietary software platform developed in-house and is the only one of its kind to use it. Thirdly, it uses offers that have no wagering requirements, though we’ve since seen several new online bingo sites go down the same route to try and make things fairer and less complicated for players. Furthermore, it was the first online bingo site to place no cap on the amount of real money that customers could win through its special offers.

Initially, the site offered just a handful of slots from Thunderkick, but soon started sealing partnerships with other big developers and soon had around 100 video slots thanks to securing a deal with Eyecon, which included popular titles like Shaman’s Dream, Fluffy Favourites, and Beat the Bobbies.

It also featured a variety of free, jackpot, 90-ball, and 75-ball bingo rooms.

Within a year, the brand won the prestigious Rising Star award at the EGR Operator Awards. Plus, it was also nominated for Best Mobile Bingo Product.

At the time, the EGR panel described MrQ.com as “an impressive market entrant” that’s “certainly focusing on the right areas”.

Soon after MrQ.com scooped its Rising Star Award, it continued to create new partnerships with other software providers, the most notable of which was NetEnt.

In October 2019, its games library was significantly boosted by the introduction of a host of top NetEnt titles such as Starburst, Finn and the Swirly Spin, and Gonzo’s Quest.

The brand then introduced games from more popular developers – Quickspin and High5, allowing it to double its current number of online slots.

Only a couple of months after partnering with those big names, the online bingo site teamed up with Microgaming, which is one of the biggest casino software designers in the world.

The move allowed the site’s owners to further extend its progressive jackpot slot and video slot collection to include the world-famous Mega Moolah, along with Who Wants to be a Millionaire and Book of Oz.

The rollout of the new games also included titles from some of Microgaming’s own partners such as Gameburger Studios, Slingshot Studios, and Alchemy Gaming, which are delivered via the Quickfire platform.

This saw some of Pariplay’s best slots including Gold’orado, Dragons of the North, and Viking Glory added to the games lobby, as well as a suite of third-party suppliers’ releases.

MrQ.com decides to Relax and take it easy

Although we can’t actually ever see MrQ taking a time-out from improving its impressive and unique online bingo and casino product, it seems as though it likes to relax from time-to-time.

It’s all thanks to a new operator partnership between MrQ and Relax Gaming which has led to Relax’s portfolio of in-house and third-party games being rolled out across the site.

As well as top-performing Relax Gaming slots, Snake Arena and Hellcatraz, the deal has allowed MrQ to offer several exciting titles from Relax’s Powered by and Silver Bullet studio partners.

So, what does the future hold in store for MrQ? Nobody knows but we can’t wait to find out! In the meantime, see what Lindar Media founder Savvas Fellas has to say about his MrQ.com journey in our exclusive podcast with Savvas Fellas.