Hello and welcome to ‘Roger Plays’ – our fun video series in which our host, Roger Knowles, makes a fool of himself while playing online bingo!

Roger goes for the win on Sailor Bingo. 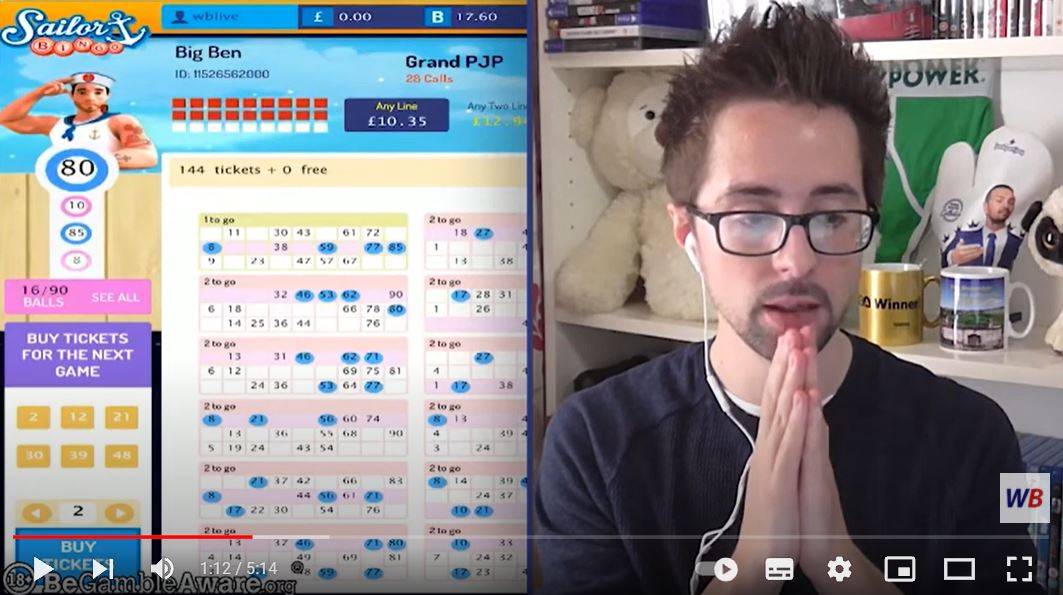 Roger hits the seven seas and takes on Sailor Bingo in this latest Roger Plays episode.

Roger tries his hand on Betfair Bingo in this latest episode. 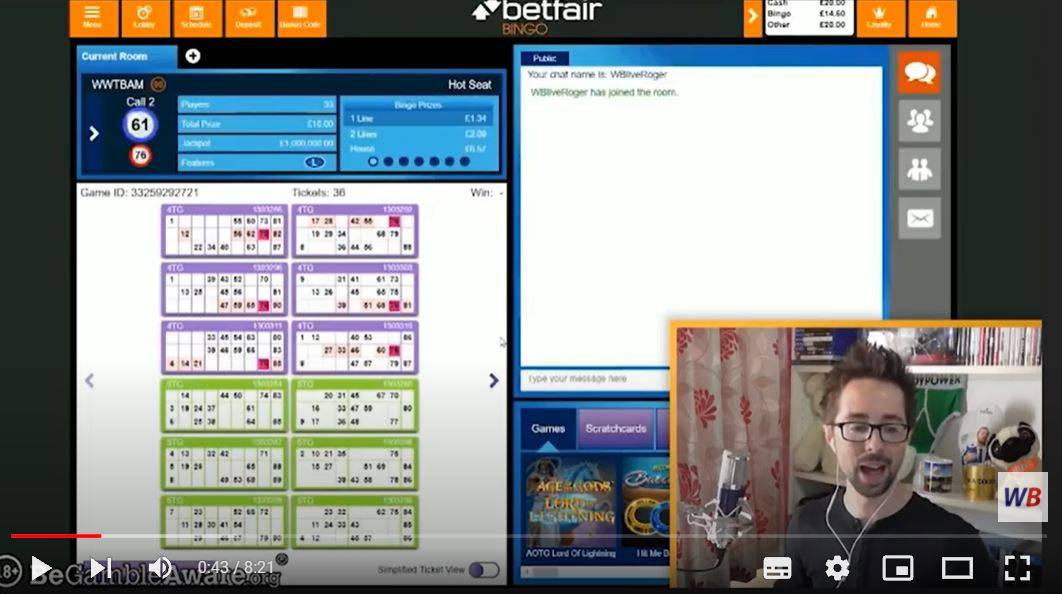 Who Wants To A Millionaire bingo & Laser Fruit slot game

Roger takes on Betfair Bingo in this latest Roger Plays episode and goes for a big win in the final bingo game.

Roger returns to Jackpotjoy in this latest episode on Roger Plays.

During the live recording of Roger Plays on WhichBingo Live Roger receives a surprise phone call.

Roger returns in this latest Roger Plays episode as he tries out Sing Bingo! Can he get lucky with their online bingo and slot games?

Roger hits the beach and tries out Heart Bingo.

Roger is back in the latest Roger Plays episode and he is trying out the bingo and slot games at Heart Bingo. He finds a slot game that brings back memories of 90s Saturday evening tv watching.

We return to Bingocams in this latest Roger Plays Episode.

Roger tries out the bingo and the slot games on Glossy Bingo in the latest Roger Plays episode.

Roger has ago at the 90 ball online bingo games and Bridesmaids Slot game on Glossy Bingo. Can Roger get a lucky win and get ready to PARTY!?

In this episode, Roger finds out how sweet Sugar Bingo is.

Roger takes on the 90 ball bingo room Penny Express and tries his hand at the new NetEnt slot game Hotline. Will his luck pull through?

Even tho it’s the 13th episode of Roger Plays, it certainly isn’t unlucky for Roger. Roger returns to Paddy Power Bingo in this latest Roger Plays and tries out some horse racing themed slot games to coincide with the Cheltenham Festival.

With a whole new look and the Wink Reward Shop being introduced, Roger takes a look at Wink Bingo in this latest Roger Plays episode.

Can Roger get past his ‘1tg’ curse?

With the launch of Sun Bingo‘s new TV advert, Roger tries his luck in the Candy room, Jazz room and also has ago go at The Winning Headline slot game. Are you gonna bingo?
The Video is here >>>

To coincide with a brand new TV advert, Roger is going to try his hand at Bingo and slots on Sun Bingo in this latest Roger Plays. Are you gonna bingo?

Roger tries his luck on Coronation Street Bingo and the Titanic slot game at Coral Bingo in this latest Roger Plays episode.

Even with Roger suffering from a cold (even tho he says its flu) can he get a big win on the bingo and slots at Coral Bingo? Find out as he takes on Coronation Street Bingo and the Titanic slot game.

In this latest episode of Roger Plays, Roger tries out bgo Bingo. Not only does he try the online bingo but he also has ago at the slots.

Roger sees some big wins in this episode, not only in the bingo rooms but on the slots as well.

Costa Bingo is the latest online bingo site to be played in this episode of Roger Plays.

Roger has his Costa Bingo/Top Gun sunglasses on and he is ready to play some bingo. He goes for the big win in the Sunny Goldmine bingo room.

Roger attempts to get a big win on Kitty Bingo in this latest episode of Roger Plays, can his cat Minnie help him?

In this latest Roger Plays video, Roger goes for a win on Butlers Bingo.

There are two questions that need to be answered. Will he win? and celebration dance will he do when he wins?

For the first Roger Plays of 2018, he takes on Mecca Bingo. No spoilers but he gets a massive win.

Roger attempts to get a big win on bingo at Paddy Power before Christmas.

Deal or No Deal Bingo

Can Roger get a big win before Christmas playing Deal or No Deal 90 ball bingo?

In this series, Roger takes on some of the TV soap-themed bingo rooms exclusive to Gala Bingo.

Roger carries on with the soap opera-themed bingo games with Coronation Street Bingo at Gala Bingo.

In this series of Roger Plays, it’s the Halloween Spooktacular at Bingocams!

Even with the Gremlins effecting Bingocams, can Roger get his first win on online bingo during Bingocams Halloween Spooktacular?

Roger resorts to fancy dress to help him increase his luck during the Bingocams Halloween Spooktacular.

In the first episode, Roger takes a look at one of the biggest and best sites around, Jackpotjoy.

But will he get that big win he craves? Let’s find out.

Roger takes on the Sapphire room at Jackpotjoy and sees if the recently crowned king of bingo, Paddy Mcguinness, can give him some luck.

Roger has the most amazing idea while playing Jackpotjoy. Bingo nightclubs! It’s the answer to livening up bingo halls.

Is Roger’s luck about to change and win big with over £300 up for grabs?

Where should Roger play next?

Let us know which bingo site or specific bingo or slot games Roger should play next!