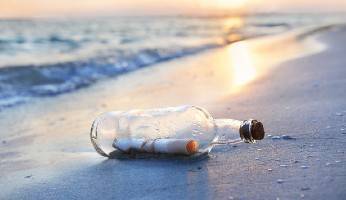 Sea Faring Tales of a Message in a Bottle

Did you know the weirdest of things get celebrated and brought to the public’s attention via social media?

For thousands of years, messages in a bottle were used to communicate with the rest of the world. In fact, they can be dated way back to 310 BC when Theophrastus, the Greek philosopher, put sealed messages in bottles into the sea to confirm his theory that the Mediterranean Sea is formed by the water flowing in from the Atlantic Ocean.

While this form of communication is no longer used in the modern era, it still plays a role in many creative areas including films, slots and music, Message in a Bottle by The Police, anyone?

Your Chances of Finding a Message in a Bottle

Unfortunately, we’re sorry to be the bearer of bad news but the odds of finding a message in a bottle are pretty slim. It’s been estimated that as little as one in 300,000 bottles that wash up on shore contain a message. What’s more, a real-life case of a message in a bottle thrown into the Atlantic Ocean took over 28 years to be found and had travelled a massive 5000 miles!

Famous Message in a Bottle Stories

Over the years, there have been many messages in bottles that have beaten world records and become famous! Here are some of our favourites with an interesting story behind them:

Slots Featuring Messages in a Bottle

We wouldn’t be doing our job right if we didn’t bring you details of some seafaring slot games featuring the ocean as the backdrop. While not up in the realms of Irish or Egyptian themed games the sea theme is a familiar one and includes titles such as Queen of Atlantis, Reef Run, Eye of the Kraken, Silent Run and Titanic.

What’s more, many slot games even contain messages in a bottle as a symbol on their reels! Ocean’s Treasure is a thrilling NetEnt slot with gorgeous graphics, stacked wilds and a free spins bonus round with a level multiplier up to 12x. One of the high paying symbols on its reels is a message in a bottle as well as an ocean key and a compass.

Another fantastic slot game is Pirate’s Plenty from Red Tiger Gaming which features plenty of free spins, a wild monkey and wild ship feature and has top payouts of up to 5000x your stake. Watch out for the wild ship feature where you can get lots of ship in bottle symbols on your reels!

Ocean themed slot games are incredibly popular and so we expect to see many more games with this theme and message in bottle symbols over the reels.