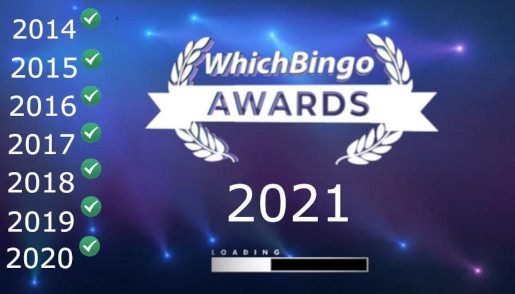 When we decided to upgrade and expand the WhichBingo Site of the Year annual vote to make it the WhichBingo Awards, with more trophies to give away and to include a formal awards ceremony, we could not have believed what a popular event it would prove to be.

The year was 2014 and the WhichBingo brand was really taking off. The bingo brands themselves were very keen to get behind the awards and we can all understand why I am sure – everyone loves to win an award. What has made these awards extra special over the years is that the majority of them are voted for by the players of the bingo sites themselves. This means that if a brand lets its players know they need their votes they are likely to come and show their support for their favourite bingo site.

Who are the WhichBingo Award Winners?

Although up to now we have given away seven Best Bingo Site Awards under the new system, we have to say that the real winners in this particular area is Gamesys – the power behind two of the biggest brands around. That’s because between them they have scooped the award four times out of the seven. Those brands are Jackpotjoy and Heart Bingo. Jackpotjoy has taken the Best Bingo Site title three times and Heart Bingo has walked away with it twice.

It is also fair to say that Playtech also has a good track record too as they are the other platform with a lot of pro-active players who are happy to cast their votes for their top brands.

Where have the WhichBingo Awards been held?

Where else would we choose to celebrate the most British of games, but in the English capital city of London? Every year we have tried to make the Awards event bigger, better and even more memorable than the year before.

In 2014 we took the inaugural event to the Millbank Tower, one of the highest skyscrapers in the capital (at the time), with panoramic views along the River Thames, taking in the Houses of Parliament, Tower Bridge and The London Eye.

2015 saw WhichBingo take to the water aboard HMS President, although the ship never actually left the quayside. There were still some guests that didn’t appreciate the rocking of the boat, however, and it wasn’t the abundant supply of alcohol that was making them feel a trifle queasy. We had a celebrity presenter this year too, when comedian Sanderson Jones took to the stage. He was the face of bingo brand Winner Bingo in their TV adverts at the time.

Madame Tussaud’s proved to be so popular with guests that we held the event there not just once, but twice. The first time was in 2016 and is the year in which Kerry Katona made an appearance and we don’t just mean in waxwork form! Kerry had set up her own online bingo site called Bingo With Kerry and scooped the award for Best New Bingo Site and was there in person to collect her trophy.

In 2017 we had added ‘Ooh la la’ when we hosted the awards at the famous Café de Paris. This is the year we had added entertainment in the form of a comedian, Des O’Connor (but not the one you are thinking) and from the in house can-can dancers Cabaret Rouge, who had all the male guests getting hot under the collar.

2018 saw us go for an industrial theme at The Steel Yard, an impressive venue over two floors. Close-up magician Stephen Simmons provided the entertainment and proceeded to baffle and amaze everyone he came in contact with. There was a massive bar (which was always busy) and on the upper floor there was Blackjack and Roulette for points, with the guests with the most won points winning a prize at the end of the night.

In 2019 it was back to Madame Tussaud’s, minus the real-life celebrities. Instead, we just had the very lifelike models that the venue is famous for and many of the guests took the opportunity to take a selfie with their favourite celebrity. Our own Roger Knowles hosted, but as regular readers will know he has moved on to an actual bingo brand taking with him his own inimitable brand of humour. Buzz Bingo is lucky to have him and the players love him.

No real-world event for the Awards in 2020 as the real world was hit with a global pandemic. Although the awards were held later than usual as events unfolded and everything was shrouded in uncertainty, we still made a statement! The WhichBingo Awards became a virtual event and we had household names Rustie Lee, Linda Lusardi and Christopher Biggins on screed to provide a lot of fun and to announce the winners.

That’s been a real trip down memory lane!

The 2021 Awards are now open for voting and the winners will be announced in another exciting virtual event this year. However, all being well we will be back in the real world early in 2022 to bring everyone in the bingo industry back together with a bang.