Sun Bingo Having a ball

It is fair to say that 2017 saw the Having a Ball team become a major force in the ongoing success of Sun Bingo and the building of its online community.

When the site decided that bingo world records are now fair game to be broken, the Having a Ball team and hundreds of Sun Bingo players were called upon to make it happen.

Rustie Lee, Chico and Chris Hopkins, together with close to 400 Sun Bingo players, had a fun day by the seaside in Blackpool on 3rd June 2017 as the site made its attempt on breaking the records for a game with the biggest bingo balls and for the largest bingo card – both on the same day. 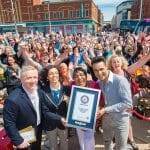 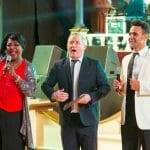 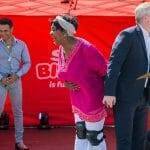 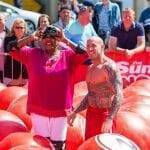 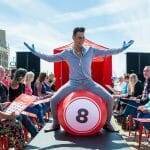 A stage was set up on Blackpool prom in front of Blackpool Tower and saw the team take to the stage to run the record breaking bingo game. Rustie was blindfolded and chose the huge balls at random. They were then handed to Chico on stage who made sure everyone got a good look at the numbers and Chris Hopkins announced the numbers to the crowd and the VIP players.

It’s fair to say the game nearly created a record for the longest bingo game in history too, but it all added to the fun. Brian McFadden and Keith Duffy, ex of Westlife and Boyzone respectively performed as BoyzLife and Chico also gave us a song and got everyone dancing along.

Fun and games – live and in person

Once inside the Tower Ballroom for the second record of the day,the Having a Ball team really came into their own.

Interacting with the audience and getting them involved in games on the dancefloor came naturally and at one point the team were joined by guest panellist Russell Grant. Chris Hopkins called the numbers with the help of the booming voice of Peter Dickson from The X Factor and organist Jean Martyn, who is also an integral part of the live streamed show, made an appearance playing the famous Tower Wurlitzer organ.

Special guests are a fun part of any Having a Ball show and this live event was no different. In addition to BoyzLife we also saw Cheryl Baker take to the stage with The Fizz (three parts Bucks, but unable by copyright to use the full name).

Sun Bingo really is fun bingo, in many ways thanks to the Having a Ball team, and now it is a two times record breaker as well. 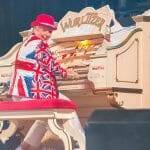 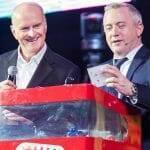 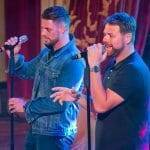 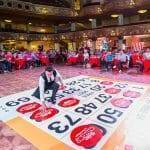 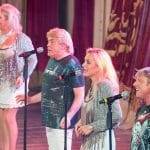 Sun Bingo Having a ball with Rusty Lee, Chico & Biggins

For anyone not yet familiar with Sun Bingo you need to know that they go the extra mile to provide ongoing entertainment and more ways to win for their players than almost any other online bingo site out there.

To that end they introduced the live show mayhem of Having a Ball into the chat rooms for players to enjoy and to give them a chance to win lots of bonuses and shopping vouchers.

At launch Big Brother winner turned TV presenter Brian Dowling was the host with Rustie Lee and keyboard playing Britain’s Got Talent star Jean Martyn as his trusty assistants. Move forward 12 months and Rustie Lee is the face of Sun Bingo and the star of the show. Jean Martyn is still there, but by Rustie’s side are a variety of showbiz legends including Chico, Christopher Biggins and Russell Grant to name just a few.

WhichBingo was privileged to be invited to go behind the scenes to see how the show is brought to life and of course couldn’t resist having a photo with the stars of the show.

Rustie may make what she does look easy and you may just think that she and the team turn up for an hour on a Friday night and provide the (almost) flawless show that is beamed into the Sun Bingo Candy Room chat room at 9pm. We can tell you that producing this show takes careful planning and an army of professionals.

Prep for the Friday show starts earlier in the week with meetings about the theme of the show. The one we witnessed was based around all things jungle in honour of the start of the new series of I’m a Celebrity, Get Me Out Of Here and the timely presence of showbiz legend and former King of the Jungle himself, Christopher Biggins.

With all props sourced and games devised to fit around the theme things really start to swing into action with the studio being set up at 2pm on the Friday to ensure that the show can start at 9pm that night.

At 3.30pm Rustie and Jean appear with the sound operator and autocue operator to make sure everything is in order and that the technical side of things is in order for them.

At 4pm Rustie is called upon to change costume on a number of occasions in the following half an hour as she is filmed for other promotional videos for the site and fun segments for the popular Sun Bingo Facebook page and other social media channels. 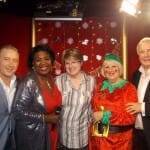 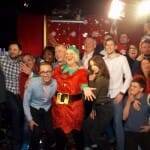 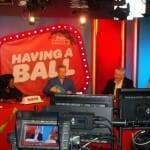 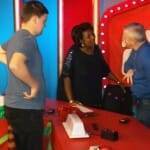 At 4.30pm it’s time to gather the entire team together and the Green Room is a hive of activity. Soon after it’s rehearsal time (yes, the mayhem you see on screen really is the result of planning and rehearsal!).

This ensures that the questions make sense and that timings relating to things like moving ‘the talent’ from studio to studio for different segments and obtaining answers from the Sun Bingo roomies by the Chat Hosts on the teams can be factored in to the running order.

There is time for a short break and some food in the green room before everyone goes to costume, hair and make-up. However, it is the lovely Jean Martyn they really go to town on. She emerges as a lovely red and green elf with rosy cheeks and the studio lights up, infected by her cheeriness.

On this particular occasion there were other plans in place to help Sun Bingo with their customer engagement and marketing drive. There was a Facebook Live session with host Chris, Rustie Lee, Jean Martyn and Christopher Biggins, which the players loved and was a great warm up for the main show.

There is now also a Sun Bingo response to the latest craze, the Mannequin Challenge, filmed the same night too. We told you that it was a packed schedule for everyone involved in the production:

We can honestly say the show was the epitome of professionalism from all concerned.

It might interest you to know, though, that such are the rules and regulations around everything these days that there is even a lawyer in the gallery throughout the broadcast of the live show to ensure there are no breaches. So, when the ‘phone rings and the host says “It’s the lawyer!”, he isn’t joking.

As this was the last show in the current series there was the obligatory production portrait and this will just give an indication of how many people it actually takes to get a simple looking show like Having a Ball on to the screen to be enjoyed by hundreds of online bingo players in the Sun Bingo chat rooms.

Fortunately, all went without a hitch on Friday, but it doesn’t always go according to plan. Here’s an example of how things going wrong on a live broadcast can be mortifying for the people at the centre of the action, but absolutely hilarious for everyone around them and the viewers, or in this case Sun Bingo roomies… (word of warning – there’s swearing)!

With thanks to Hannah, Chuck, Mark and Lucie for the behind the scenes access and info and to Rustie Lee, Christopher Biggins, Jean Martyn and Chris Hopkins for putting up with me getting in the way and remaining cheerful and friendly and welcoming.