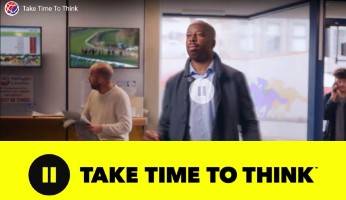 The Betting and Gaming Council’s latest safer gambling campaign has just gone live. It’s called “Take Time to Think” and it aims to encourage customers to use its members’ responsible gaming tools including time-outs and deposit limits.

For some time, the gambling industry has been telling us, “When The Fun Stops, Stop”, but some experts and studies believe that the message may not be as effective as was initially hoped and that many gambling site users have become ‘blind’ to the message.

It’s perhaps for this reason that the Betting and Gaming Council (BGC) has just revealed a new ad campaign which will replace “When The Fun Stops, Stop” with an alternative message of “Take Time To Think”.

What’s the new campaign all about?

After consulting with multiple operators, Government stakeholders and academics, the Betting and Gaming Council has decided that an alternative safer gambling message of “Take Time To Think” is a more effective way of encouraging the public to bet responsibly.

It’s a clear and simple slogan that will hopefully speak for itself by making sports bettors and poker, bingo and casino players stop and think about how much they can afford to spend and whether to bet at all by looking more closely at the various safer gambling tools that are available at online brands.

Most major operators support a minimum of time-outs, self-exclusion and deposit limits, while others offer extra features like game time reminders and reality checks.

The campaign cost several million pounds to put together and will be launched via a series of TV adverts. It also has a dedicated website, and the “Take Time To Think” banner will be prominently displayed in participating retail outlets and online gambling sites.

Michael Dugher, the BGC’s chief executive says that the regulated industry will continue “to do more to promote ever high standards in safe gambling”.

Which brands and operators are represented by the BGC?