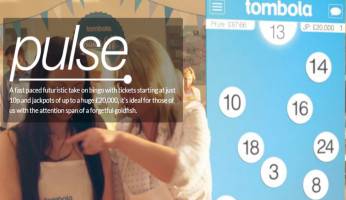 The Pulse room at tombola is celebrating no less than four lucky jackpot winners, each of whom took home a massive £20,000 in cash. The room has been hosting a Summer Party which has given players the chance to win up to £200 in every game, as well as a progressive jackpot prize, so it has been particularly busy.

Players gkknipe1, jordyjords, starstacey and feelinglucky20 are all likely to be thanking their lucky stars that they decided to play at their favourite online bingo site this week as all four of them are celebrating a £20,000 jackpot win.

Tombola’s Pulse room was responsible for their good fortune, and it’s one of the most popular rooms at the independent UK bingo site.

Since the Pulse room launched at tombola back in the summer of 2014, it’s proved one of the most popular features at the site.

Rather than using traditional bingo tickets which are automatically dabbed and sorted into order, it presents you with a screen of 12 floating numbers which are randomly picked before each game begins. As the balls are announced, any matches causing the respective floating bingo ball to burst and disappear, and as you get closer to a win, the tempo increases while the background colour becomes increasingly brighter and more colourful.

There are now various Pulse rooms available, including Hasty, Express, Flash, Swift, Velocity, Speedy, Spring, Zoom and Spritely, and each room is restricted to approximately 90 players so that it’s easier to win games.

How do I win a Pulse game?

Unlike 90-ball games, Pulse offers just one prize which is for a full house. So, if you’re the first person to burst all the numbers on your screen, WTG! However, there’s also a two-tier jackpot that can be claimed in 16 or 19 calls. Jackpots are never shared, so if more than one player claims, both of them receive the full amount!

Why not read WhichBingo’s tombola review for more information about the games and promotions that you can find at the site?