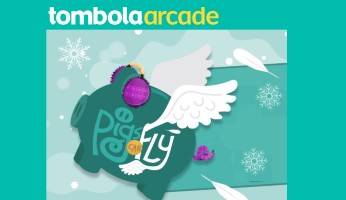 If like us, you love the saying “pigs might fly” to describe something as extremely unlikely to occur, it’s time to release your inner optimist as pigs are currently flying through Tombola Arcade every week during February 2021!

Every Monday this month between 8pm and 9pm, there’s an extra £5,000 up for grabs thanks to the site’s Piggy Party.

There are four exciting games to unlock, and you can gain access to each one by staking just £1 cash in 15-minute segments on Arcade games like Cosmos, Devils, and Pop.

Each Pigs Might Fly* game contains 9 flying piggy banks and you must tap on them to crack them open. Simply match 3 amounts to win an instant cash prize of between £1 and £500.

You can keep up with all the latest news at Tombola by visiting the site’s homepage page, and for the past couple of months, the Community Hub page has been displaying a weekly noticeboard which shows you all the exciting special offers and events that are due to take place.

This week, for example, there’s a Pub Quiz taking place in the Bingo90 Aqua room, and the lucky winner gets a £30 voucher.

Plus, over on Tombola’s Facebook page, the 28 Days of Giveaways promotion runs until the end of February. Each day, a different CM takes over the page to ask a trivia question, and you have until 11pm that night to comment with your answer.

*Every Monday in February. To unlock each game, stake £1 cash total across arcade every 15 minutes from 8pm. Max 4 games/day. Cash Prizes. Terms apply.