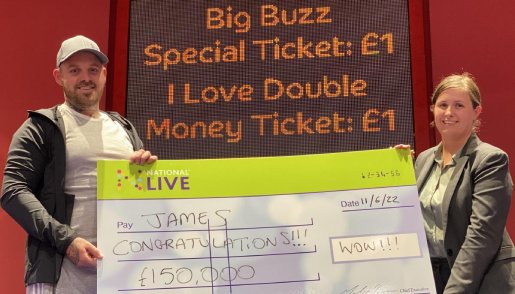 Just recently, a man called James Foster was looking for “fun things to do” in his local area. After finding a nearby bingo club, he took the decision to head down and sign up as a new member. Little did he know that his decision would lead him to a massive win.

More about James and his big win

James, who lives in Warrington, was looking forward to a rare night out without his kids. However, the family-orientated man was slightly at a loss for what to do with his evening, so he decided to turn to Google for a little help.

The search engine came up trumps with all sorts of interesting events and activities that James could enjoy in the Warrington area, including a trip to the local Buzz Bingo hall on Prince Henry Square in Cockhedge.

As James had never played at the club before, he headed down in plenty of time to sign up at reception, where he was given a very warm Buzz Bingo welcome.

During his visit, he took part in a National Jackpot Game which is played across multiple clubs in the UK twice a day.

When his numbers quickly came up, James realised that he’d won far more than the standard full house prize. However, he initially thought that he’d won £50,000 which he was extremely chuffed about. Staff at the club soon put him in the picture and informed him that he’d actually won the top prize of £150,000.

The lucky lad says that he plans to use his winnings to set up a business and purchase a new home for his family.

The club’s manager, Kevin Carrigan, says that James’ “face just said it all” when they told him how much he’d won. He adds that “that Google search certainly paid off!”

More about bingo in Warrington

Buzz Bingo is the only bingo club in Warrington, Cheshire. However, there are also nearby clubs in Widnes and St Helens.

The town is also home to a nightclub called PJs which is due to host a Bop and Bingo night on the 23rd of September, and guests will be able to enjoy a night of stage games, live performances, drag queens, DJs, and butler service.