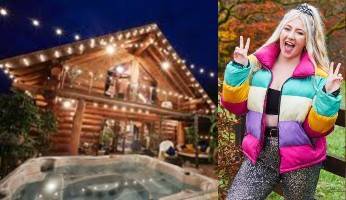 The latest reality-romance TV series to hit our screens is ITV’s “The Cabins”.

Usually, we’re treated to Love Island in the summer months, but due to Coronavirus restrictions, this year’s series had to be postponed, but the clever bosses at ITV have worked out a way to give us some socially distanced essential viewing through the winter.

The line-up for “The Cabins” has just been announced, and there will be a total of twelve singletons heading to an undisclosed location in the UK, all of whom are hoping to find romance.

One of them is 24-year-old Jess from Newport, Wales. She used to work at Florida’s Walt Disney World, but has since moved back to the UK where she now works as a bingo caller.

After being single for two years, Jess has decided that it’s high time she found “the male version of me” who can become “a best friend as well as a boyfriend”. She’s looking for someone adventurous, knows how to have fun, and can keep up with her crazy lifestyle.

Perhaps, Jess could find herself partnered with 22-year-old Joel, a bin man from Swansea who’s failed to find a suitable partner in his native city and is hellbent on finding “an amazing date” as well as diving into the cabin’s jacuzzi.

The idea behind the show is to send three couples on a date before they decide whether they wish to share a cabin for 24 hours so that they can get to know each other better.

A stay in the cabins is likely to prove a popular option as each one is kitted out with a cosy outdoor seating area, a hot tub, games, and a fully-equipped kitchen.

The new series of “The Cabins” is underway, so tune in and see if you can spot bingo caller Jess.