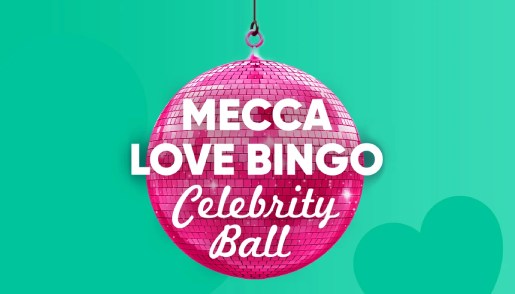 What Went on at the Mecca Love Bingo Celebrity Ball

Last month, we told you how Mecca Bingo was giving players the chance to win free tickets to its star-studded celebrity ball. If you weren’t lucky enough to make the guest list, you can now find out exactly what went on at this exciting event which saw a number of special guests mingle with Mecca Bingo fans, as well as the live final of the brand’s talent competition.

When did the ball take place?

On the Saturday night, there was a huge party featuring celebrities ranging from TOWIE’s Bobby Norris and Pixie Lott to Strictly Come Dancing’s Robyn Windsor and psychic Sally Morgan.

Naturally, there were also bingo games to enjoy, as well as dancing lessons, meet and greets, and live musical performances.

Who attended and what happened?

The ticket winners all received a 2-night hotel stay as part of their prize package, as well as the chance to bring a +1.

On the Saturday morning, they all tucked into a hearty breakfast before heading off to the Mecca Luton bingo club.

As guests entered the venue, they were given a warm welcome by Lisa and Craig, the hosts of MeccaTV before hitting the open bar and getting to know each other.

The morning continued with a series of bingo games in which Dan Edgar and Bobby Norris acted as bingo callers.

As the day went on, Sally Morgan mingled with the audience, giving some of them her famous psychic predictions. Then, it was time to get a dancing lesson from a Strictly pro before sitting down to a well-deserved dinner.

Dinner finished with a brilliant performance from Ray Quinn, and once Ray left the stage, the club welcomed the finalists of Mecca Bingo’s Got Talent.

The finalists each performed in front of the crowd before the panel of judges (which included Britain’s Got Talent finalist Wayne Woodward, Union J’s Jaymi, and actress Sherrie Hewson) decided who deserved to be crowned the winner.

They picked 34-year-old Mitchell Miller who was awarded a £5,000 prize and an introduction to a top talent agency.

The night ended with a live performance from Pixie Lott, followed by some tunes from Union J’s Jaymi and a DJ set which got everyone up dancing.

We can’t wait for the next one.

Thank you for sharing!
Your comment is awaiting moderation and will be posted soon. Thank you for taking part in our discussion and helping fellow players!
Lisa
Mecca is a brilliant site love the c ms very friendly great choice of bingo and free bingo I love it