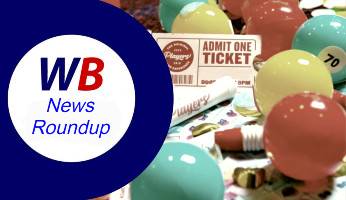 In this week’s news round-up, Tombola and Microgaming are both preparing to launch new games, Entain players get ready for the Euros, Mecca celebrates another jackpot winner, members of The Palaces look forward to National Bingo Day coach trips, Unibet launches a new live casino, Pragmatic Play improves its Drops & Wins promotion, Rank Group improves its safer gambling systems and a popular Ayr bingo hall looks set to stay despite the venue being up for sale.

One of Microgaming’s most popular video slots has been treated to a Mega Moolah makeover.

The supernatural-themed Immortal Romance Mega Moolah will feature four progressive jackpots, as well as a Wild Desire feature and a choice of four free spin bonuses that offer a variety of benefits.

Entain, which owns Foxy Bingo and Gala Bingo, is gearing up for a busy summer due to the Euros.

The operator is expecting 3 million footie fans across Europe to place bets on the popular football competition. So far, Entain’s UK customers have placed the most bets, and France seems to be the most popular choice for those betting on the outright winner.

Visitors to Mecca Bingo in Ayr are breathing a sigh of relief following the announcement that the building that’s been its home for the last two decades will remain a bingo hall despite being sold at auction.

According to a Mecca Bingo representative, the company’s lease on the premises runs up until 2026. So, whoever the venue’s new owner is, they will need to honour the current arrangement.

The historic building is due to go to auction next week.

Artificial Intelligence is being used to power the latest upgrade to the Rank Group’s safer gambling system, Hawkeye.

Hawkeye is a real-time gambling monitoring tool that aims to quickly and easily identify Mecca Bingo and Grosvenor Casino customers who are displaying unusual gambling behaviours.

A bingo lover from Dundee has just scooped a massive £50,000 after beating other players to a full house during the National Bingo Game.

The 27-year-old woman has been attending her local Mecca Bingo club for almost 10 years, and just a few weeks after bingo halls were allowed to reopen, her loyalty finally paid off.

Unibet customers can now enjoy everything from blackjack, Sic Bo, baccarat and roulette to live gameshows like Mega Wheel.

A recent comment on the homepage of Tombola suggests that a brand-new game is coming to the site very soon.

Although it refers to a “new bingo game”, the post also contains a hint that the brand is “keeping our cards close to our chest” which suggests it could be a cards-based bingo game rather than a numbers-based one. Keep checking back with WhichBingo for more information.

Lucky lottery winner plans to celebrate with trip to the bingo

A lucky mum from North-West London has just won £10k every month for a year after her daughter bought her a surprise Set for Life lottery ticket for her 45th birthday.

Cheryl Crowley says that she’s planning to celebrate her unexpected win by heading to the bingo hall on Father’s Day. The hard-working mum also plans to share some of the cash with the rest of her family and, according to her daughter, “a no-expense-spared shopping spree is on the cards”.

Pragmatic Play’s Drops & Wins promotion has been around for a while, but it’s just been updated to make it better than ever.

The promotion now incorporates slots and live casino games, with a staggering €500,000 prize pool being available for each vertical every month.

The Palaces, which owns a small chain of bingo clubs in London, Norfolk and Suffolk, is encouraging its members to celebrate this year’s National Bingo Day by joining fellow players and staff on a celebratory coach trip.

The Big Weekend Celebration is being hosted by the brand’s Great Yarmouth club and will allow players to visit other Palaces venues for bingo games and an after-party.