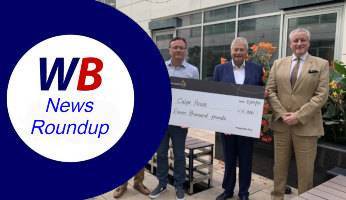 This week, there are hopes that a former Buzz Bingo club could reopen while popular high street betting shops owned by Entain get a 21st-century makeover. The team behind Bingo Blast gives away more than €40,000 to good causes and Lottoland gets hit with a £760,000 fine. We’ve also got the lowdown on the latest big wins including a player who scooped a massive £74,000 with a 50p bingo ticket. Plus, Gamstop reveals a marked rise in players signing up for its services.

Last year, Buzz Bingo made the hard decision to permanently close 26 of its UK clubs. However, it seems as though one of them may be getting a new lease of life.

The Oxford club (which is next door to the home of Oxford United FC) was originally deemed ‘unviable’, but Firoka (Oxford Leisure) Ltd begs to differ.

The company has just applied to the council for a change of use that would allow it to reopen the venue as a bingo club that would also allow for other leisure use. It hopes that by altering the venue’s license to serve either leisure or bingo customers, a new tenant will step forward.

ICE gaming expo to move from UK to Europe?

The popular annual ICE gaming expo has been held in London since its inaugural event. However, a leading exhibitor is calling on the event’s organisers to consider moving it to mainland Europe.

The reason behind the request is reportedly rising costs and Brexit-related complications, although a poll carried out in August 2021 shows that 75% of attendees believe London to be the most convenient location.

Online bingo and casino operator, Entain is providing a founding grant to the University of Nevada in Las Vegas that will help to support a pioneering gaming and betting research initiative.

The university’s International Gaming Institute plans to perform both operational and scientific research that will enable it to produce “actionable, operational programs” that can be used in real-world venues by operators, legislators and regulators.

Lottoland, the lottery betting and iGaming operator, has been issued with a £760,000 fine for failing to meet social responsibility and anti-money laundering requirements.

The UK Gambling Commission completed its investigation earlier this month and has now ordered Lottoland to take remedial action.

The UKGC’s findings range from failing to warrant customer responses to emails explaining responsible gaming tools and carrying out sufficient financial and affordability checks to recognising worrying behavioural patterns and allowing members to register debit cards in other peoples’ names.

The online operator and owner of numerous UK bingo halls, Buzz Bingo has just announced that a lucky player has scooped its 40th £50,000 Big Buzz Special bingo jackpot at its Falkirk club.

So far, Buzz has awarded an impressive £2m to its jackpot winners since May, and it continues to run Big Buzz Special games every day in clubs and online.

Following successful trials, Ladbrokes and Coral retail units have been redesigned to give them a more contemporary appearance that better reflects the brands’ online experience.

Entain has also confirmed that it plans to have 30 new-look Coral and Ladbrokes shops (which it refers to as digital hubs) in locations such as Newcastle, Leicester, Leeds, London and Birmingham by the end of 2021.

Gamstop, the gambling self-exclusion scheme has reported a 25% increase in registrations during the first half of 2021. While the service’s CEO, Fiona Palmer is encouraged that people are engaging with Gamstop, the increased number of registrations highlights the importance of continuing to raise awareness of practical problem gambling tools.

41% of those who registered were aged 25-34 and 59% were aged 18-34 which seems to indicate that younger people are more likely to experience gambling harms than older ones.

The company behind the highly popular online bingo game Bingo Blast has just donated more than €40k to good causes.

Pragmatic Play works with local communities in its core locations, and so far, an animal hospital and a domestic violence charity in Romania have benefitted, as well as a Parkinson’s support organisation in Malta and a Gibraltar-based charity that organises accommodation for locals who are sent to London hospitals for treatment.

An anonymous mum from Liverpool has just won a whopping £74,042 after buying an online bingo ticket at Mecca Bingo for just 50p.

Despite telling reporters that she was “famously unlucky”, the mum-of-one was bowled over when she realised that she’d landed the giant jackpot. Her hubby is equally shocked, although having had time to process the news, the pair are now looking forward to doing some home renovations.