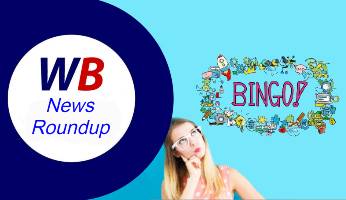 In this week’s news round-up, there’s a new bingo room to check out at Gamesys sites including Jackpotjoy, Jumpman Gaming bingo brands have two shiny new iPhones to give away, Tombola hosts Safeplay week and a lucky player wins £10k on a roller-coaster ride. Pragmatic Play releases an exciting new video slot, weekly prize draws at Gala Bingo feature £50k of cash, residents in Whitby are up in arms about a potential alcohol license for a local bingo hall, Bongo’s Bingo announces an amazing musical line-up for its upcoming shows, and gambling participation in Great Britain significantly drops off.

The live bingo events company, Bongo’s Bingo has just announced that two exciting musical acts will be taking part in its forthcoming shows.

Nadine Coyle of Girls Aloud fame will be joining Fatman Scoop as Bongo’s Bingo takes to the road on a UK tour over the summer and autumn.

According to the UK Gambling Commission’s latest data, participation in gambling activities has fallen to its lowest level in 5 years.

However, the charity GamCare says that it’s still unclear what short and long-term impacts the pandemic has caused. It also points out that the UKGC’s data does not include the Euros tournament.

The popular seaside town of Whitby is home to an independent bingo hall called Galleon Bingo.

The venue also contains a café bar that has applied for a license to sell alcohol both on and off the premises from 9 AM until 11 PM from Monday to Sunday.

So far, six residents have objected to the café’s application as they are concerned that it may encourage antisocial behaviour. The local council will be reviewing the application next week.

The exclusive Roller-Coaster room at Tombola has just paid out an impressive £10,000 to a player who goes by the alias tommytrucker. Players can ride the roller-coaster for as little as 5p.

This week is also Safeplay week at Tombola, and players are being reminded about the sites safer gambling tools and services. There are also 50 Safeplay goody boxes up for grabs and the free entry form can be accessed here.

Gala is hosting £50k prize draws every week in August

Gala Bingo is known for running generous promotions, and this month the brand is giving away £50k cash every single week!

Between 2nd and 29th August, you can earn prize draw entries for buying bingo tickets in specific rooms including Fluffy Favourites Bingo, Deal or No Deal 90, Castle, Rush and Metropolis.

The Summer Sizzler is underway at 15 Network bingo sites, and it runs until 31st August.

When players wager at least £10 on selected slots including 777 Strike, Wild Hot Chilli Reels, Fruit Shop and Aloha, they get the chance to win one of two iPhone 12 Pros worth £1,000 each.

Summer Sizzler Giveaway T&Cs: all players who wager £10 on specified games between 1st – 31st August 2021 will be entered into the prize draw, plus one further entry for every extra £10 wagered on the games. The prize draw is held across all Jumpman gaming sites. The winning prizes for this promotion are: 2x iPhone 12 Pros. Winners may opt for a cash prize alternative of £1,000 each, Your account must be active when claiming prizes in order for the winnings / prizes to be valid.

If you enjoy playing Cluster Pays slots like Aloha, check out the latest release from bingo provider, Pragmatic Play.

Winning clusters can pay up to 1,000 times your bet, and the Tumble feature also allows for consecutive wins from single spins.

The Free Spins Bonus can be retriggered an unlimited number of times and it also features giant egg symbols that can increase the win multiplier up to 11x.

An exciting new bingo game has just launched at Jackpotjoy and Virgin Games.

It’s called Bubble Up Bingo and it uses 90 balls.

Players can purchase tickets for as little as 10p and you can buy up to 60 tickets per game.

As well as one-line, two-line and full house prizes, Bubble Up Bingo features an exciting jackpot. The progressive Super 7 Jackpot is awarded when a full house is claimed on number 7. There’s also a Double Up Bonus that doubles the standard prizes when the win is claimed on a double number such as 22.