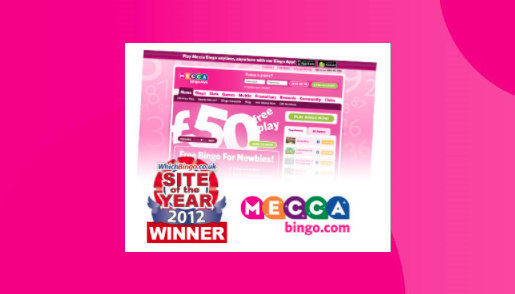 As you may know, the WhichBingo Awards have been around for some time now and the 2022 contest is now open. Each year, we ask a panel of judges, as well as our readers, to vote for their favourite bingo brands. Back in 2012, you voted Mecca Bingo as the Best Bingo Site of the Year, and today, we look at what progress it has made over the last decade. I think it is fair to say this is one brand that has gone from strength to strength.

An overwhelming majority of you voted for Mecca Bingo as your favourite bingo brand back in 2012, although Bingo Hollywood finished a close second.

It wasn’t the first time that Mecca scooped our top award either as the brand also took the title home in 2006.

Back at the start of 2012, Mecca Bingo was running its January Sales. Its bingo rooms included Club Bingo, Deal or No Deal, and Britain’s Got Talent while its most popular slots were Reel King, Alice’s Wonderland, Cleopatra, and Bejeweled.

The Gold Rush networked room had only just been added to the site, Marie Curie Cancer Care Bingo Week was running on the first week of every month, and new customers could claim up to £50 of free play when they deposited and wagered at least £5.

In 2020, the brand launched its Mecca Dream Come True promotion, with the lucky winners scooping money-can’t-buy prizes such as a year of free bingo, a fashion makeover with Gemma Sheppard, and a house makeover with Claire Sweeney.

As recently as 2021, the brand won the award for Best Mobile Bingo Site and Most Socially Responsible Operator.

The same year, it celebrated its 60th birthday with a brand refresh that included a new logo and a new look for its website.

2021 also saw the brand bid a sad farewell to several of its land-based clubs including York, South Shields, Telford, Rotherham, and Bedford due to the financial losses that it incurred as a result of COVID-19 lockdowns and local restrictions.

Raffles were also added to the site in 2021, allowing players to take a shot at some amazing prizes. In the same year, Mecca TV (an exciting new form of live entertainment featuring “Live from Studio M”) launched to the delight of Mecca Bingo fans. The exclusive chain broadcasts live several times a week and has welcomed several celebrity guests including Jack Fincham and Shaughna Phillips to help it host its live draws.

We can’t wait to see what the next decade holds for Mecca!

Don’t forget, we’re currently inviting our readers to cast their votes for their favourite brands in the 2022 WhichBingo Awards. Find out more here!