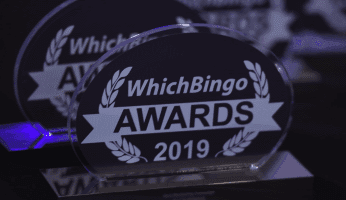 After a turbulent year in the online bingo industry, it was wonderful to see representatives from dozens of bingo and slots brands, in attendance at Madame Tussauds in London for the 2019 WhichBingo Awards.

This awards ceremony is one of the most eagerly anticipated events in the online gaming industry calendar, thanks to the mixture of player votes and expert judges decisions that decide the winners of the 18 different categories. Where once only online bingo was represented, changes in player habits have meant that slot games make up an important part of the online bingo site experience, so the best slot games and best slots sites are now highlighted amongst the traditional online bingo awards handed out.

Jackpotjoy took the overall crown, being named Best Bingo Site 2019 and the team were overjoyed to regain the accolade they last won in 2015.

Although there has been a marked reduction in the number of new bingo sites being opened in the current climate of change in online gaming, the New Bingo Site category is still hard-fought and sought after as it represents a successful launch and legions of happy players prepared to cast their vote. This year the title went to Buzz Bingo, powered by Playtech. Buzz Bingo also won the award for Best Marketing Campaign awarded by the panel of judges, making it a doubly successful night for them.

Highly sought-after awards are the ones for Best Customer Service, retained for the third year running by Mecca Bingo, and Most Socially Responsible Operator – taken this year by Tombola who also secured a second award, taking the trophy for Best Social Media too.

There were 18 awards categories in all, and here is the full list of WhichBingo Award winners 2019:

This is the second time that the iconic Madame Tussaud’s wax museum has been the venue for the WhichBingo Awards, proving a popular choice in 2016. All the famous faces you would expect are there to greet you, including Dame Helen Mirren, Tom Cruise, Benedict Cumberbatch and Nicole Kidman; all the way up to the Duke and Duchess of Cambridge, William and Kate, Prince Harry and Meghan Markle and the Queen herself.

The guests enjoyed the Spirit of London ride on arrival, before heading to the party area where they were greeted with complimentary drinks and delicious bowl food canapes. As the drink flowed freely so did the chatter and old friends caught up with each other, new friendships were formed and maybe even some new deals were struck. In this area were figures of many Hollywood stars and so lifelike are these creations that sometimes you felt yourself heading to talk to one of them before realising they were not going to answer you! Many a selfie was snapped by the guests with George Clooney, Tom Cruise, Lady Gaga, Eddie Redmayne and Prince Harry.

When the time came to head to the main awards room guests passed by famous sporting figures such as Jessica Ennis-Hill and Mo Farah, world leaders and music icons like The Beatles.

WhichBingo’s own Roger Knowles, host of ‘Roger Plays…’ was the tremendous master of ceremonies, launching himself with hearty abandon onto the stage to the unmistakable sound of ‘Let Me Entertain You’ by Robbie Williams – a big claim to live up to!

The guests were keen to know all the winners and the room rang with cheers as each winner was announced. It’s fair to say the cheers got louder as the event progressed, thanks in no small part to free champagne kindly provided by event sponsor Microgaming and the open bar generously laid on by XLMedia on behalf of WhichBingo.

Once all the awards had been handed out and the lucky winners had been interviewed by Roger, everyone was free to dance the night away – and dance they did. The floor was full and everyone was happy. Another successful WhichBIngo Awards in the bag and we can’t wait to do it all again next year.