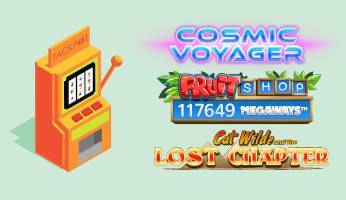 January always feels like the longest month and with the ongoing lockdowns in the UK, this month has felt like at least a year! However, it’s not all doom and gloom as, although we’re still in the cold and snowy weather, there are lots of great new slot games from some of our favourite software providers to keep us entertained. Netent, Play’n Go and Thunderkick have been super busy releasing exciting slot games, two of which are sequels/part of a series of games that you may already be familiar with.

Let’s not waste any more time and jump straight in with the new slot releases we think you need to check out!

If you’re an online slots fanatic, there is no doubt you’ll already have played the original Fruit Shop slot game from NetEnt. Well, now it’s back again but this time, players will be playing with a massive 117,649 ways to win payline structure as NetEnt has incorporated Big Time Gaming’s popular Megaways mechanism. This slot game keeps to the fruit theme and offers players simple gameplay with a wild symbol and free spins bonus round where there is the potential to win up to 20,000x your stake.

Play’n Go has been busy releasing slot games and one that we’ve been waiting to try is Cat Wilde and the Lost Chapter. This game is part of the Rich Wilde and Cat Wilde series of slots which usually focuses on one of these two adventurers as they hunt down cash treasures. In the Lost Chapter, players will be transported to the inside of an Egyptian tomb where you’ll be spinning the five reels and 10 paylines to help Cat Wilde get the treasure inside. If you enjoy action-packed slots, then this could be a better option than Fruit Shop Megaways as you’ll be spinning the reels for wilds, free spins, unlimited pyramid spins and expanding symbols, where a massive 10,000x your stake is up for grabs.

Last, but not least, we have Cosmic Voyager. This slot game is from the developers at Thunderkick and if you’re looking for phenomenal graphics, then look no further than this slot game. Players are transported into outer space where they’ll be spinning its five reel and 10 paylines for the chance to win a jackpot of 5000x their stake. This is another slot game with expanding symbols plus there are free spins and wilds to keep you spinning. With bets per spin starting from just 10p, this is a game not to be missed this month!

So, what can we expect over the next few weeks? Well, Playtech’s next Age of the Gods slot is sure to be a firm favourite as Age of the Gods Book of Oracle is released as well as Microgaming’s Animals of Africa slot. What’s more, there’s Dinosaur Rage from Quickspin and Rome: The Golden Age from NetEnt to look forward to. Be sure to check back in two weeks as we’ll have recommendations for all the best new slots to spin from the world’s top software providers!