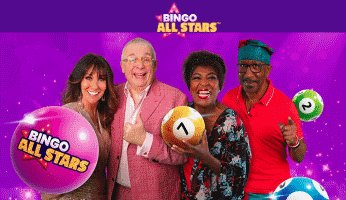 Who Are the Bingo All Stars?

There has been a distinct lack of excitement in the online bingo world over the last 12 months or so surrounding the few new bingo sites that have actually launched.Well, we are pleased to see that the tide is about to turn and this brand new site is about to set the bingo community chattering.

Bingo All Stars is a bingo site like no other. Yes, it is on the Dragonfish network and yes, you may be familiar with most of the bingo rooms you find there. What you won’t find at those other sites that you might have tried in the past is the star quality that is present here.

Tell me who I’ll meet!

Big names from the light entertainment world, who also happen to be close friends, have come together to bring fun and community back to bingo.

TV chef Rustie Lee, model and actress Linda Lusardi, actor Christopher Biggins, fitness guru Mr Motivator (aka Derrick Evans), organist Jean Martyn and astrologer Russell Grant are the famous faces behind Bingo All Stars, but as time goes on you will see them in front of the camera on-site too.

Most of the team have already been around the entertainment element of another well-known bingo site and know their legs eleven from their two little ducks. They were bitten by the bingo bug and, in particular, the fun that it could generate and the community it could develop – at the right site. Well, they believe they have put together such a site.

In the near future players can expect plenty of visual entertainment from the group too as they push the Dragonfish technology to its limits to bring the fun and games to life. The site will have a range of exclusive bingo rooms, but for now the fun is confined to just the one, the All Star Lounge

Already there is a schedule of chat room appearances planned, starting on Friday 8th May with Rustie, Saturday 9th with Linda and Sunday 10th with Christopher Biggins or Mr Motivator – they are still squabbling over who gets to chat to everyone first! These chat room visits will see the stars hosting between 8pm and 9pm each evening, answering questions and generally joining in the chat room fun.

Members at Bingo All Stars will also have the chance to win a Facetime call with one of the celebs every week in Facetime Friday*. This in itself shows the personal touch that is going to be so evident at the site and is just one of the ways the site really will live up to its name.

Look out for our exclusive podcast chat with Rustie Lee next week, when we hope to get even more behind the scenes gossip about this brilliant new site.