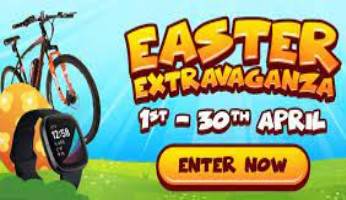 Now that we’re allowed to travel within the UK again, many of us can’t wait to get out and about. And for those of us who’ve spent the majority of our time watching too much TV and raiding the fridge, a bit of exercise wouldn’t go amiss either.

While you might already have a bike tucked away in your shed or plans to go jogging, you might also want to consider taking part in an exciting new promotion called the Easter Extravaganza as it’s offering players the chance to win two great fitness gadgets this month.

The Easter Extravaganza is running at bingo sites on the 15 Network between Thursday 1st and Friday 30th April 20201.

For your chance to get your hands on a Swifty Electric Mountain Bike or a Fitbit Sense Advanced, all you need to do is play the Action Bank slot. Each £10 that you wager on the game during the promotional period earns you one prize draw entry, and the lucky winners can also choose to take a £1,000 cash prize alternative.

For those of you who are unfamiliar with the Action Bank slot game, it might interest you to know that it’s made by the same company that designed Rainbow Riches (Barcrest).

It uses 5 reels and 20 paylines, and it looks a little bit like a game of noughts and crosses as there are just three paying symbols that you can use to make winning combinations, as well as zeros that have no value. However, these zeros have the potential to transform into golden bank vaults which can trigger the exciting Action Bank bonus game which includes free spins, win multipliers and a potential top prize of 500x your times.

You can take part in the promotion at a variety of online bingo sites, including Barbados Bingo, WTG Bingo and Lucky Cow Bingo.

All players who wager £10 on Action Bank between 1st – 30th April 2021 will be entered into the prize draw and can collect one further entry into the prize draw for every extra £10 wagered on the game during the promotional dates. The prize draw is held across all Jumpman gaming sites. The winning prizes for this promotion are: 2x Swifty Electric Mountain Bikes Black/Orange and 2x Fitbit Sense Advanced with Bluetooth Carbon/Graphite Steel. The two winners may opt for a cash prize alternative of £1,000 each, which will be credited to their accounts as Real Cash. The winning players will be contacted by email within 7 days of the promotion ending. All promotional prizes must be claimed within 7 days of the winning notification be sent to you. Your account must be active when claiming prizes in order for the winnings / prizes to be valid.