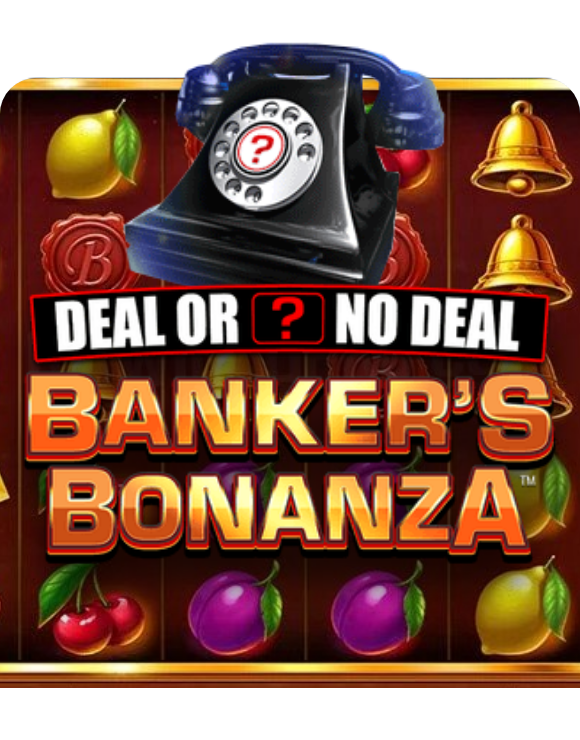 Play for Free \ Watch Where to play? Play on Jackpotjoy Bingo

Deal or No Deal Banker’s Bonanza is a Blueprint Gaming creation and another official slot game based on the iconic television show. Players can spin its six reels and as this game uses the scatter pays mechanic, players need eight or more matching symbols to get a win. 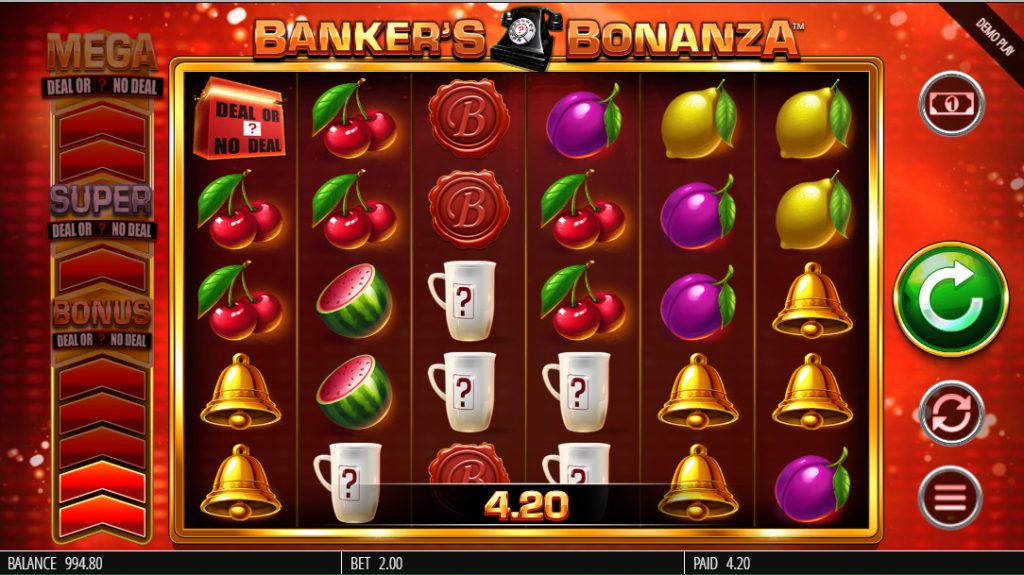 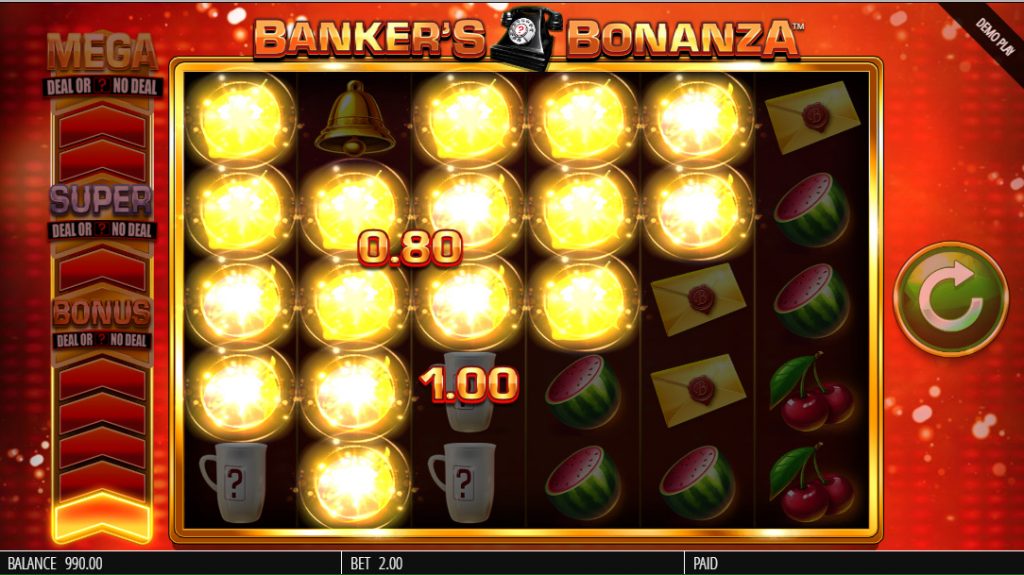 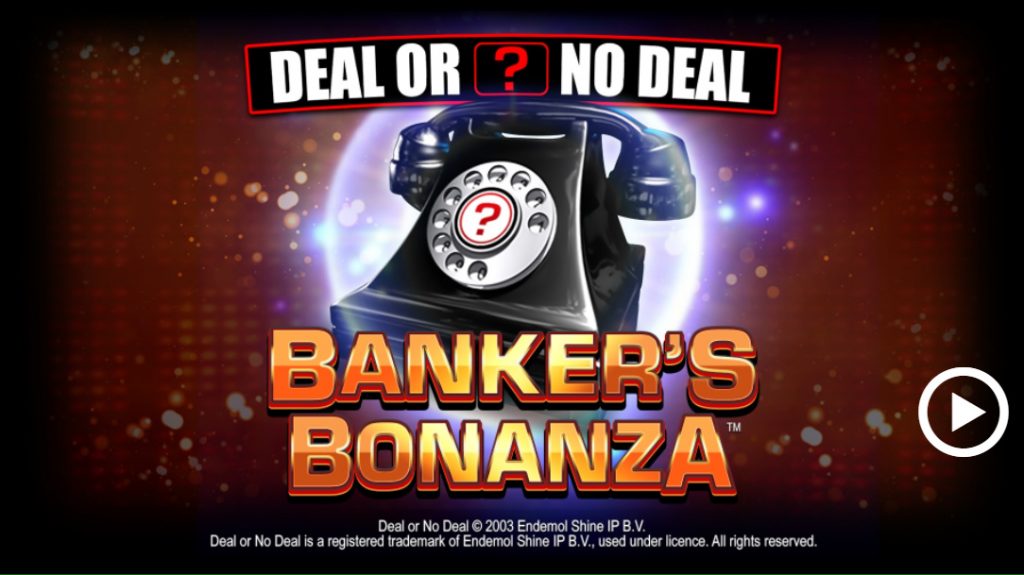 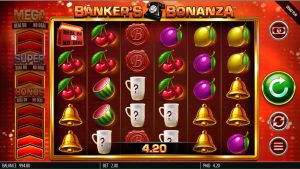 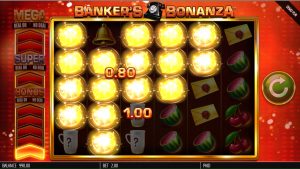 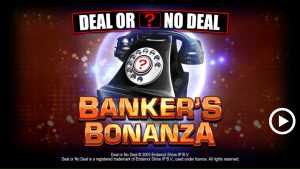 This game has a classic slot feel to it but with a twist. On the reels, you will find plenty of the traditional fruit symbols as well as the Deal or No Deal red box, an envelope, a wax seal and more. This game is packed with exciting bonuses including a Dead or No Deal feature where you can accept or reject offers from the banker and multipliers of up to 100x your stake is available. With wins of up to 50,000x your stake up for grabs, could you beat the banker?

If you think this could be the slot game for you, carry on reading our Deal or No Deal Banker’s Bonanza review for all the information you need to know about this game.

Spinning the reels of Deal or No Deal Banker’s bonus is incredibly easy. Players can use the money symbol to the side of the reels to toggle their bet per spin. This can range anywhere from 10p to £50 per spin. Hit the large green and white arrow spin button to send the reels tumbling.

This slot game uses the scatter pays mechanic and so players can get a winning combination by landing eight or more matching symbols on the reels.

The highest value symbol on the reels is the Deal or No Deal box symbol and this pays up to 25x your stake when 12 or more land on the reels. During the bonus features, there is the chance to win up to 50,000x your stake.

Deal or No Deal Banker’s Bonanza uses the scatter pays function and so each time you get a winning combination of eight or more matching symbols on the reels, the symbols in that combo will be taken off the reels to allow new symbols to take their places. This can help to create even more winning combinations. If a new win is not created, the round will end.

The cash prizes are available to view to the left of the reels while the free spins prizes are available to view to the right of the reels. This is a picking game where the number of free spins and cash prizes you get is determined by the boxes you open. You can choose one box and this is reserved until the end of the round. The picking game then begins and the prizes are revealed and taken off the screen. The banker will call to make an offer to the player and they can choose to either carry on the picking game or take the offer. If you go to the end of the round, you will get the box that you picked first and the prize inside.

This game also has a free spins bonus round that can be randomly triggered when you accept the banker’s offer. During this round, the multiplier symbol comes into play and awards multipliers of between 2x and 100x. Players can get an additional five free spins when three or more scatter symbols land on the reels. Once the round is finished, the multiplier symbols will be added and totalled up to award a prize.

Deal or No Deal Banker’s Bonanza is very reminiscent of the television show and the slot has a classic feel to it with a twist. The backdrop to the reels is the iconic red box colour and on the reels you will find lots of classic symbols including plums, lemons, watermelons, gold bells and cherries. In addition to that, there are envelopes, wax seals, Deal or No Deal mugs and the famous Deal or No Deal red box also make an appearance as the highest value symbol. The soundtrack is very basic and players may want to play on mute, however, it is a good idea to switch it back on for the bonus rounds as you will hear the voice of the one and only Deal or No Deal host, Noel Edmonds, which is a fantastic touch to the game.

Deal or No Deal Banker’s Bonanza is a brilliant slot game and offers something different to the standard slots with a wild symbol and free spins round. If you enjoyed the television show, we have no doubt you will love playing this game too. Even for those who were not a fan of the show, this is a fantastic game with great bonus features and players will especially appreciate the dear or no deal feature where they can choose to either accept or reject offers from the banker. While the graphics could be a bit better, there really is no other game on the market like this one and players have the chance to win up to 50,000x their stake!

You can check out the Deal or No Deal Banker’s Bonanza slot at a Which Bingo recommended online casino.