Play for Free \ Watch Where to play? Play on Betfred Bingo

Giddy Up Bingo is a 50-ball online bingo game that you will only find at Betfred Bingo, and it was created exclusively for the brand by the award-winning software developer Playtech. As its name suggests, Giddy Up Bingo uses a fun horseracing theme that is quite different from your run-of-the-mill bingo games. 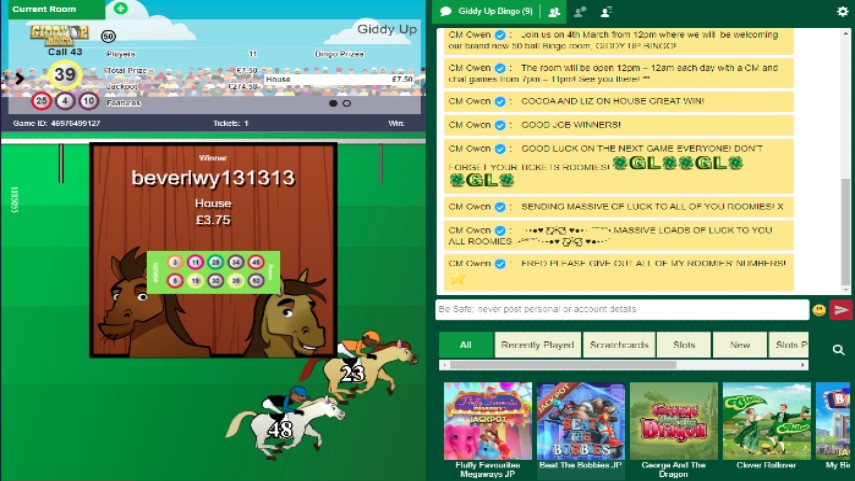 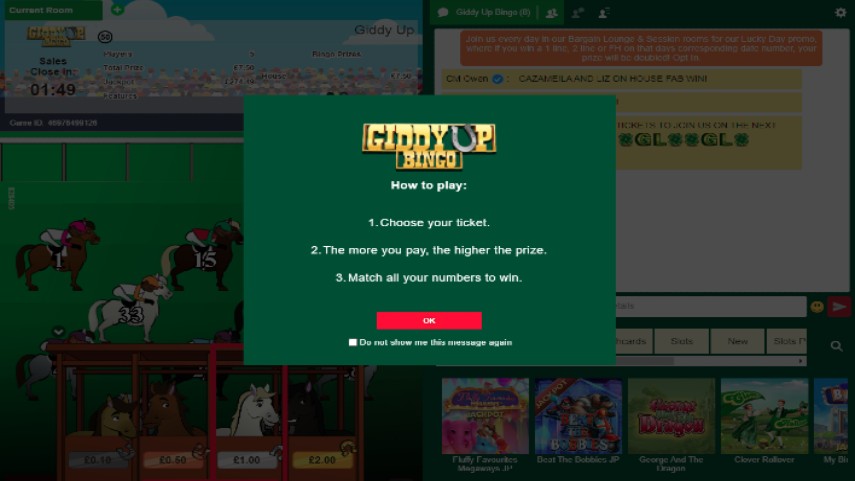 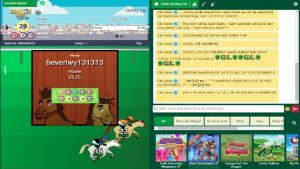 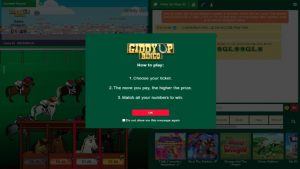 Play Giddy Up Bingo at these suggested casinos

As its name suggests, Giddy Up Bingo uses a fun horseracing theme that is quite different from your run-of-the-mill bingo games.

It’s a multi-stake game, which means that you can only buy one ticket, but at a range of prices that start at a modest 20p.

The full house prize is awarded to the first player to mark off all the horses on their bingo card.

There is also a progressive jackpot that is split between the winner and the other participating players.

As well as being appealing to the online community bingo at Betfred, Giddy Up Bingo is likely to help many horseracing fans try their hand at bingo games. It’s also a great choice of game for newbies as it uses simple graphics and rules and only uses one bingo ticket.

Before you can jump in the saddle, you’ll need to open an account with Betfred Bingo if you haven’t got one already.

Once you’ve launched the game from the bingo lobby, you must choose a stake that you’re comfortable with. You can purchase a single ticket for 10p, 50p, £1 or £2. You’ll also notice that the value of the full house prize increases and decreases in proportion to the size of your bet.

The four stake options are displayed on four different horses. Simply click on the horse (e.g. 10p) and the amount will be debited from your account.

Your ticket contains 10 horses and riders, and each horse is labelled with a number from 1 to 50.

Once the first number is announced, the bingo software automatically checks your ticket for a match, and if any of the horses’ numbers is the same as the one that’s just been called, it is removed from your ticket.

To win the full house, you must mark off all 10 of the horses from your ticket before another player beats you to it.

Giddy Up Bingo games come with the chance to win the Front Runner Jackpot.

The Front Runner Jackpot is both a progressive and a community jackpot. It’s awarded when a player calls a full house within 19 calls (a long shot, we know, but still doable in theory). 50% of it is awarded to the full house winner and the remaining 50% is shared among all other players who purchased tickets to the winning game.

The Front Runner Jackpot seeds at £150, and as it’s a progressive jackpot, it continues to grow each time that players purchase tickets to Giddy Up games. So, there’s no limit on how much it can be worth.

The fact that you’re only allowed to purchase one card per game makes it much easier to keep track of how well you’re doing.

Your single ticket sits in the centre of the screen, and instead of containing a traditional grid, it features a racetrack complete with galloping horses and a cheering crowd in the background.

At the beginning, the horses are situated at the starting gate, but as soon as the first bingo ball is announced, they set off on a mission to reach the finishing line.

The sound effects are mainly produced by the automated bingo caller. However, when you get a match on your ticket, the respective horse lets out a “neigh” as it disappears from the race.

Betfred’s Giddy Up Bingo is an excellent alternative to traditional 90-ball and 75-ball bingo games, and it’s something that we’d typically have expected from a brand like Tombola rather than Betfred. However, it makes sense for such a famous sports betting brand to bridge the somewhat awkward gap between horse racing and bingo, and we have to say that they (or Playtech, to be precise) have done a jolly good job of it! We also love that there’s a progressive jackpot to play for and the fact that half of it goes to other players and not just the jackpot winner.

Betfred has plenty of other exciting bingo games from Playtech for you to discover, including Cash Cubes, Age of the Gods Bingo, Fluffy Favourites Bingo, and Rainbow Riches Bingo. So, why not pay the site a visit to try some of them out today?