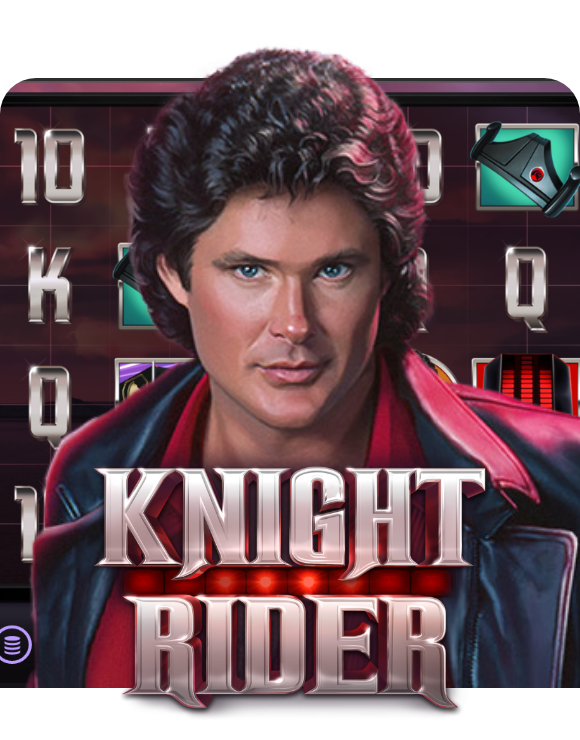 Play for Free \ Watch Where to play? Play on Barz casino

Knight Rider is a five-reel, four-row and 26 fixed payline slot game from NetEnt that is the official slot game for the hit 80s show Knight Rider. 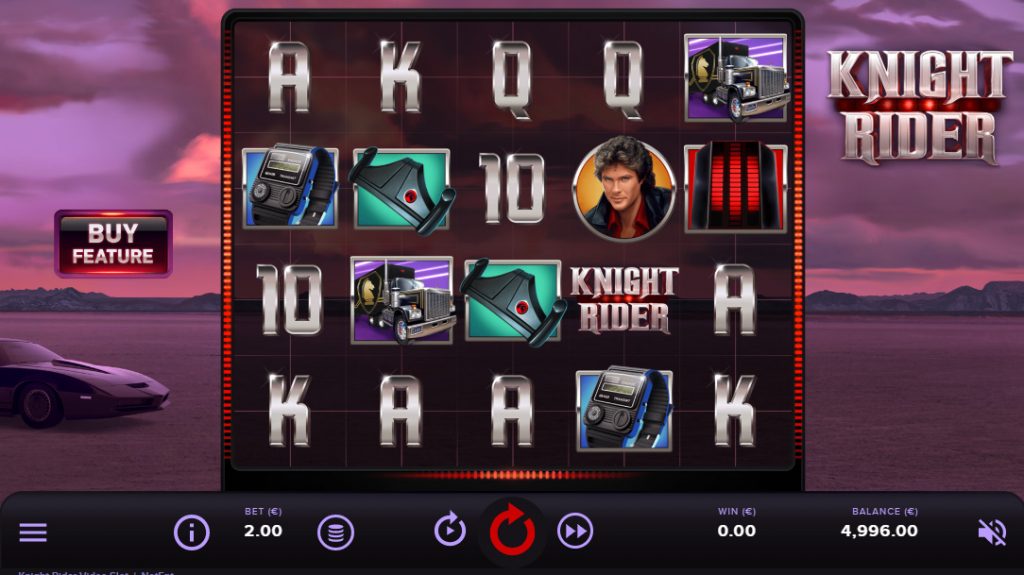 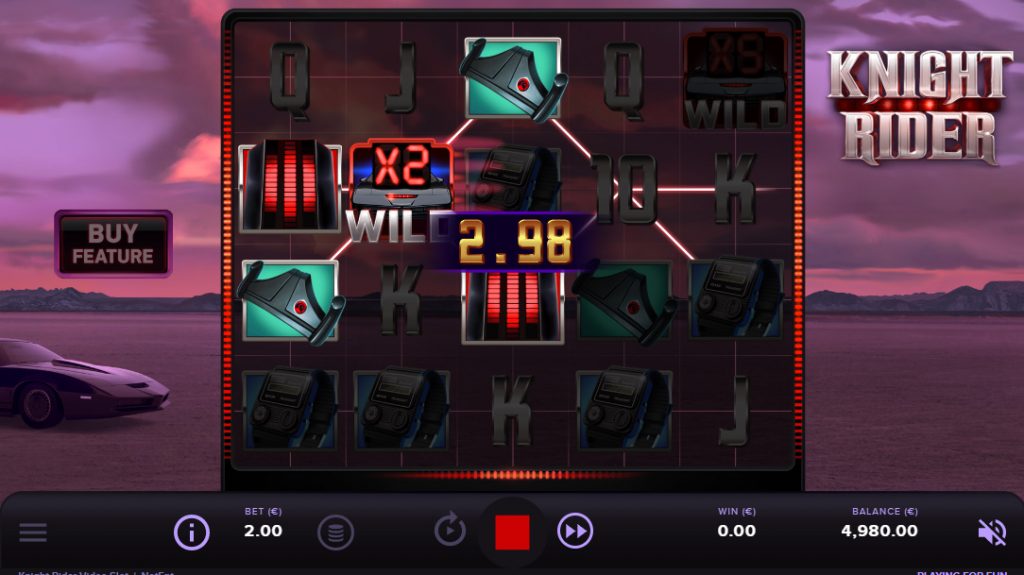 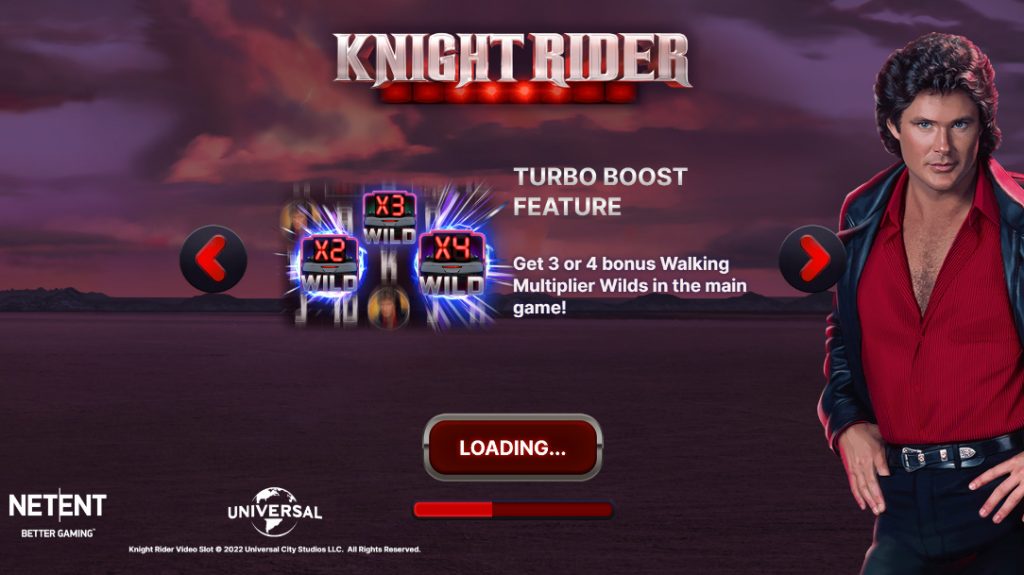 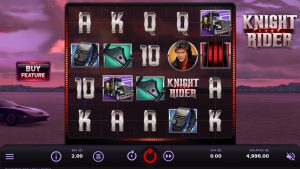 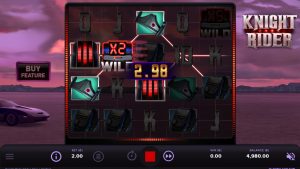 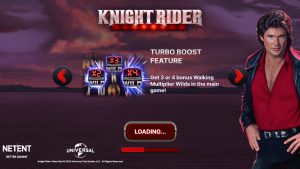 *18+. New Players Only. Min. deposit £20. Max. bonus bet is £5. Bonus spins on selected games only and must be used within 72 hours. Winnings from Bonus spins credited as bonus funds and capped at £20. Bonus funds expire in 30 days, unused bonus funds will be removed. Welcome Offer is 100% match up to £300 plus 50 bonus spins on your 1st deposit. Bonus funds are separate to Cash funds, and are subject to 40x wagering the total bonus & cash. Only bonus funds count towards wagering contribution. Affordability checks apply. Terms apply. Please gamble responsibly. BeGambleAware.org. #AD

*18+. New players only. One offer per player. Min Dep £10. Max bonus bet £5. This offer gives you a 100% match bonus up to £100 and 100 bonus spins. Bonus spins are valid on the following game(s) only: Gonzo’s Quest or Starburst. Bonus spins to be credited at a rate of 20 bonus spins per day over five days, triggered on your first deposit. Bonus spins winnings credited in the form of bonus funds and capped at £50. Bonus funds must be used within 30 days and bonus spins within 10 days, otherwise any unused shall be removed. Bonus funds are separate to Cash funds and are subject to 35x wagering on the value of the bonus funds and your cash deposit(s). Affordability checks apply. Terms apply. Play Responsibly. BeGambleAware.org #AD

Many people will remember this fantastic television show starring David Hasselhoff and will notice lots of Knight Rider themed symbols on the reels including K.I.T.T, a steering wheel, a truck and Michael Knight. This is an action-packed game where you will be joining the Knight Rider to help solve Los Angeles crime with wild symbols, walking wild multipliers, turbo boosts and a free spins bonus round where there is the opportunity to win up to 7,000x your stake.

If you think this could be the slot game for you, carry on reading our Knight Rider review for all the information you need to know about this game.

Spinning the reels of Knight Rider is easy and players can get started spinning in just a matter of minutes. Hit the stacked coins button under the reels to set your bet per spin, then hit the red arrow spin button to send the reels tumbling. Bets per spin start from 20p and rise to £40.

To form a winning combination, players must land three or more matching symbols starting from reel one and from left to right. The highest winning payline is the one that is paid out.

In the base game, the highest value symbol on the reels is Michael Knight and he will award players 4x their stake for five matching symbols on the reels. With the walking multiplier wilds and free spins round, players can potentially win up to 7,000x their stake.

There are four special features in the Knight Rider slot game. This includes a wild symbol, a walking multiplier wild feature, a turbo boost feature and a free spins bonus round.

The wild symbol is K.I.T.T with the word WILD stamped across it, so you won’t miss it. This will replace other symbols on the reels to help form new winning combinations and award cash prizes.

Players should watch out for the walking multiplier wilds landing on the reels as this can happen in either the base game or the free spins round. These wild symbols stay on the reels and only move one reel right when they are part of a winning combination. Each reel has its own multiplier for walking wilds that land on them:

In the base game, the turbo boost feature can be randomly triggered on the reels and will add three to four walking wild multipliers to the reels.

Lastly, we have the free spins bonus round that is triggered by landing three scatter symbols on the second, third and fourth reels. The scatter symbol to watch out for is the Knight Rider game logo. Players will be awarded 10 free spins and will then work their way through four free spins levels by landing the Knight chess piece symbol on the reels. Each time you land three of these symbols, it will increase the meter to the left hand side of the reels. As you move up through the reels, you will be awarded additional free spins plus walking wild multipliers:

NetEnt has done an incredible job in capturing the essence and mood of the hit television show of the 80s, Knight Rider. Players will be transferred to Los Angeles where they will be helping Michael Knight, played by the world famous David Hasselhoff, fight crime in an A.I style car named K.I.T.T. The car may even be more famous than the main actor, Hasselhoff! As you load up this game, the official soundtrack and show intro plays which is a fantastic touch from the developers. Players will then find themselves in the desert and the car sits behind the reels. On the reels, the low value symbols are your standard playing card symbols. The high value symbol all correlate to the theme and include a digital watch, Michael Knight, K.I.T.T, the car steering wheel, the car voice activation and the truck.

If you loved the Knight Rider television show back in the 80s, we have no doubt you will enjoy spinning the reels of this official slot game from NetEnt. Even if you are not familiar with the show, the graphics in this game are superb and everyone knows the one and only, David Hasselhoff! The bonus features are great and players will particularly enjoy the walking wild multipliers and the free spins bonus round as this is where you will have the chance to potentially win up to 7,000x your stake. This is a slot game that is not to be missed but if this one is not as appealing to you, there are plenty of other fantastic games from NetEnt based on hit television shows and movies! You can check out the Knight Rider slot at a Which Bingo recommended online casino.