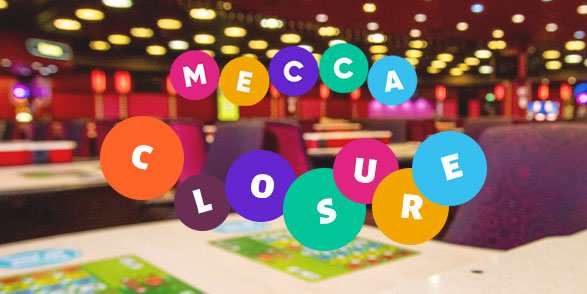 Last week, it was revealed that Mecca Bingo had taken the shock decision to close its bingo club in Halifax, West Yorkshire, leaving the town with zero bingo halls. Now, the land-based and online bingo operator has announced that it potentially plans to permanently shut at least two other venues.

Which clubs are closing?

Why are Mecca Bingo hall closing?

Mecca has blamed the closure of its Halifax branch on the COVID-19 pandemic which meant that “the last few years have been tough” on bingo halls, as well as other hospitality and entertainment businesses across the UK.

The Bridgwater Mecca Bingo club has yet to finalize its official closing date but says that it will be in August 2022. The club has been operating for 48 years, and while no reason has been given for the upcoming closure, it’s likely to be due to similar reasons as the brand’s Halifax branch.

The bingo hall in Devonport, Plymouth is likely to shut up shop this summer as well. Mecca Bingo’s Operations Director, John Dyson says that the company is “currently in discussions with our team about the proposed closure” of the club next month. It’s also said that the 18 employees that work at the venue have been informed that they will be made redundant.

Mecca Bingo in Andover is also likely to close in August after the site was sold off.

It’s obviously a sad time for UK bingo fans, as the number of British bingo halls has plummeted since the introduction of the smoking ban. The past 2 years have continued to take their toll on footfall and profits, leading Mecca Bingo rivals Buzz Bingo to close 26 of its clubs across the UK in the summer of 2020. It may well be that Mecca Bingo announces additional closures in the coming days and weeks, so watch this space for further news.

Thank you for sharing!
Your comment is awaiting moderation and will be posted soon. Thank you for taking part in our discussion and helping fellow players!
David
Really saddened by the news that Mecca are to close at least five clubs this month. Four of those are in the South/South West, which only leaves Taunton and Exeter, assuming that they don't fall victim of the axe in the future. I love Mecca Bingo, always my preferred choice, and I worked for Mecca for many years in the 70's and 80's. Spare a thought for all the staff that are losing their jobs just as we go I to the worse recession for decades. It may only be a matter of time before we lose all our clubs, and are encouraged to play online, which holds little or no interest, compared to playing at the bingo club. Very, very sad.